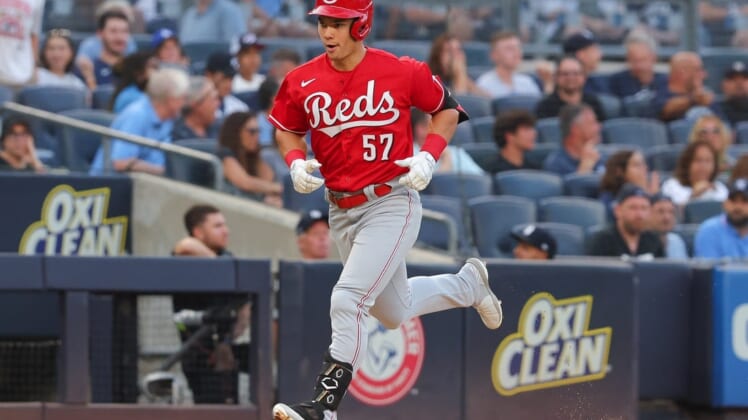 DJ LeMahieu scored the winning run on a wild pitch by Alexis Diaz with one out in the 10th inning, and the host New York Yankees stopped their second three-game losing streak of the season with a 7-6 victory over the Cincinnati Reds on Wednesday night.

Giancarlo Stanton forged a 6-6 tie when he lined a 2-2 fastball from Ian Gibaut into the first row of the right field seats to start the eighth and was batting when Diaz (2-1) threw consecutive wild pitches, allowing New York to get its 11th walk-off win.

The Yankees pulled off the win after losing starter Luis Severino to right shoulder soreness following the second inning. Severino allowed three straight homers to start the second and exited after throwing one warmup pitch in the third.

Kyle Farmer, Mike Moustakas and Stuart Fairchild homered in a four-pitch span off Severino, whose fastball was diminished.

It was the first time Cincinnati hit three straight homers since May 5, 2019 against San Francisco’s Jeff Samardzija when Eugenio Suarez, Jesse Winker and Derek Dietrich achieved the feat.

Joey Votto drove in two runs, including a tying double, and Tyler Stephenson hit a tiebreaking sacrifice fly in the fifth off JP Sears to give the Reds a 6-5 lead.

Isiah Kiner-Falefa hit a bases-clearing double to give the Yankees a short-lived 5-4 lead and cap a five-run third off Cincinnati starter Mike Minor. Gleyber Torres hit an RBI single after Joey Gallo scored New York’s first run on a fielding error by second baseman Jonathan India on a grounder by Anthony Rizzo.

Minor allowed five runs (one earned) on five hits in four innings. He struck out six and walked three.