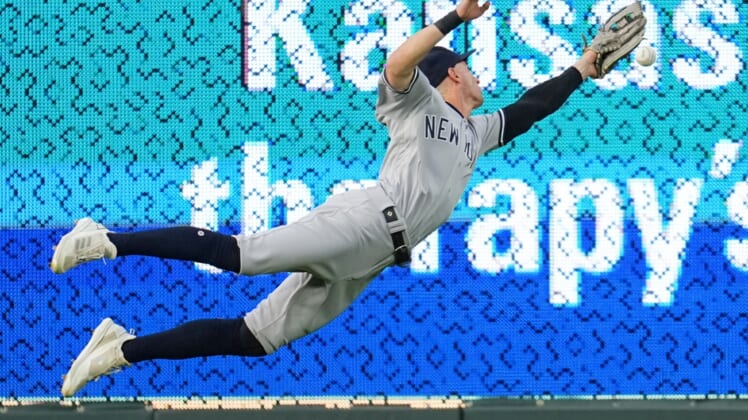 The Yankees hit four home runs, including a three-run blast by Aaron Judge to break open a close game in the seventh, as New York defeated the host Kansas City Royals 12-2 in a game shortened to eight innings by rain on Friday night.

The Yankees, who lead the majors with 29 home runs, extended their winning streak to seven games.

Nestor Cortes (1-0) picked up the win. He allowed two runs (one earned) on seven hits in five innings. He struck out three with no walks.

The Yankees quickly jumped on Bubic. DJ LeMahieu doubled leading off the first inning. After Aaron Judge lined out to center, Anthony Rizzo clubbed a home run 415 feet to straightaway center. Giancarlo Stanton followed with a 429-foot home run over the bullpen in left.

Bubic settled down to retire the next 10 batters and 14 of the final 15 he faced.

The Royals got one run back in the bottom of the first on doubles by Whit Merrifield and Salvador Perez, who snapped an 0-for-16 skid.

Kansas also scored a run in the second inning. Bobby Witt Jr. doubled with one out, extending his hitting streak to eight games. He was picked off when he broke early on an attempted steal of third. Royals manager Mike Matheny was ejected when he argued that second baseman Gleyber Torres pushed Witt off the bag at third.

Edward Olivares then singled, went to second on a passed ball and scored on a single by Michael A. Taylor single.

In the pivotal seventh inning, the Yankees’ Isiah Kiner-Falefa singled with one out. He went to second on a two-out walk to Kyle Higashioka. LeMahieu lined a single off the glove of Nicky Lopez at short that scored Kiner-Falefa, and Judge followed with his blast to the opposite field in right-center.

The Yankees scored five in the eighth on a two-run homer by Torres and a three-run double by Higashioka.