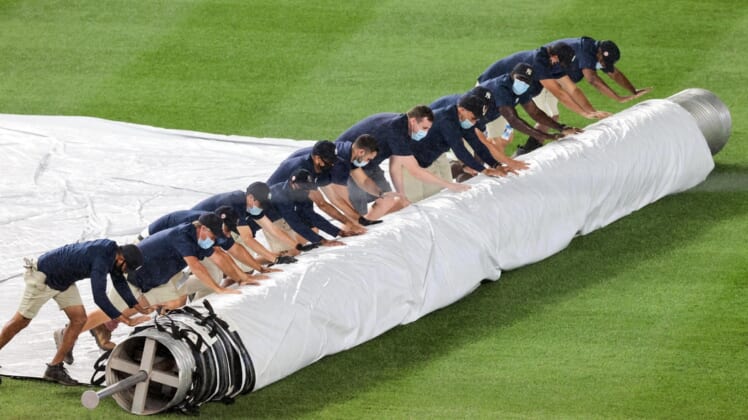 Aug 17, 2020; Bronx, New York, USA; Grounds crew covers the field for a rain delay during the top of the fourth inning of the game between the New York Yankees and the Boston Red Sox at Yankee Stadium. Mandatory Credit: Vincent Carchietta-USA TODAY Sports

No baseball will be played at Yankee Stadium on Thursday due to inclement weather in the forecast.

The New York Yankees announced the postponement two hours and 30 minutes before the finale of a four-game series with the Los Angeles Angels was scheduled to begin.

The Angels depart New York winning two of three games and having shocked the Yankees in an 11-8 victory in Wednesday’s game, which included two rain delays and a seven-run ninth inning for the visitors.

That loss leaves the Yankees at 41-39 this season and in fourth place in the American League East, trailing the rival Boston Red Sox by 8 1/2 games entering Thursday’s slate of games.

Los Angeles, 39-41 this season, is fourth in the AL West and also 8 1/2 games behind the division-leading Houston Astros.