Yankees’ Aaron Judge looks to tee off on Twins again 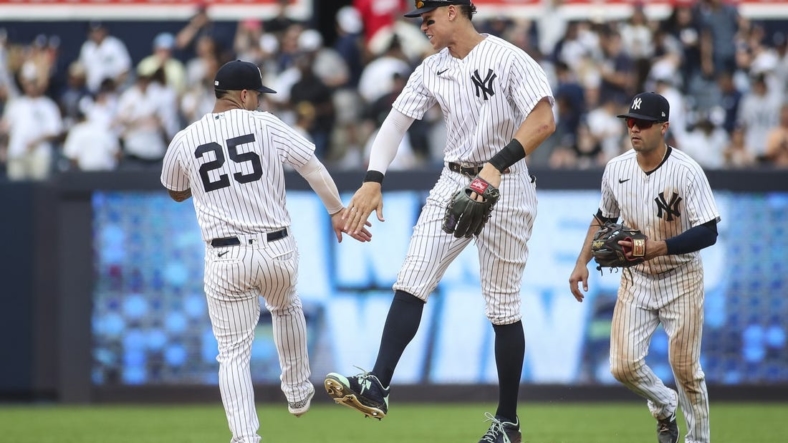 Yankees slugger Aaron Judge has 54 homers this year with 27 games remaining to hit the eight home runs and break the American League record set by New York’s Roger Maris in 1961.

After each blast soars over the fence, Judge tends to downplay the achievement. However, manager Aaron Boone and Judge’s teammates comment about how awestruck they are.

Judge’s pursuit of Maris continues Tuesday night when the Yankees play the second game of a four-game series against the visiting Minnesota Twins.

Judge has homered in three consecutive games, and his latest long ball was a tiebreaking two-run drive in the sixth inning to lead New York to a 5-2 win in the series opener on Monday.

“Every single day I show up to work ready to go and do whatever it takes to get our team a win,” Judge said. “If that’s me moving a guy over, driving a guy in, making a play on defense — that’s what I’m focused on. All the individual awards, accolades, stats you get throughout the year, it’s all based on how well you help the team out.”

Judge has 21 homers since the All-Star break while the Yankees have struggled to a 17-26 record, but they are seeking their third winning streak of at least three games since the break.

“It’s getting hard to put into words what he’s doing,” Yankees manager Aaron Boone said. “Just a special season he’s in the midst of.”

Isiah Kiner-Falefa hit his second homer of the season and Marwin Gonzalez also went deep for the Yankees, whose next victory will clinch their 30th straight winning campaign.

“It’s hard for me to just hit one (home run),” Kiner-Falefa said. “For (Judge) to do what he’s been doing but still have base hits and contribute in other ways with walks, especially when guys don’t want to pitch to him, I think that’s what makes it so impressive.”

The Twins did little on offense besides former Yankee Gary Sanchez’s two-run homer, and they have scored only 15 runs while losing four of five. Before the small slide, Minnesota followed up a six-game skid by scoring 34 runs in a five-game winning streak.

“It’s been harder to hit this year and it’s been harder to score runs this year,” Minnesota manager Rocco Baldelli said. “And some of the numbers that we used to look at and go, ‘Yeah, those are decent numbers,’ are actually really good numbers now in a lot of ways. But the downturn hasn’t seemed to affect a few guys, and Judge is one of those guys.”

Cole is 1-5 with a 3.86 ERA in eight starts since the All-Star break. He took a loss on Wednesday against the Los Angeles Angels when he allowed a three-run homer to Shohei Ohtani in the sixth inning following consecutive errors.

Cole is 3-0 with a 3.80 ERA in four career starts against the Twins. He got a no-decision on June 9 in Minnesota when he allowed seven runs and eight hits, including a career-high five homers, in 2 1/3 innings.

Joe Ryan (10-7, 3.88 ERA) is set to make his first career start against the Yankees after allowing five runs on eight hits, including a grand slam by Boston’s Xander Bogaerts, in five innings on Wednesday.