Yankees’ Aaron Judge looks for homer No. 50 vs. A’s 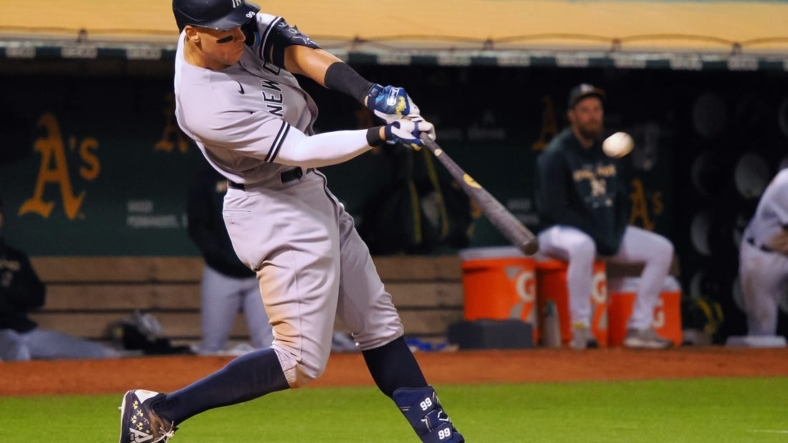 Aaron Judge has a chance to reach 50 home runs in a season for the second time in his career Saturday night when the New York Yankees go after a third straight victory over the host Oakland Athletics.

The Northern California native crushed his 49th homer, a three-run shot in the fifth inning, to provide all the Yankees’ scoring in a 3-2 win on Friday. New York had won the series opener 13-4 a night earlier.

Judge has gone 2-for-6 with four walks in the series, which has seen the Yankees improve their season record against Oakland to 5-0.

The slugger had two plate appearances after hitting his 49th on Friday, but he lined out to third base in the seventh inning before drawing his third walk in the ninth.

On a night when he became the first in the majors to record a 200th strikeout this season, it was hard to tell which Yankees starter Gerrit Cole enjoyed more: Pitching on a night when Judge hits a homer, or simply being an observer in the dugout.

“It’s really special to get to have the best seat in the house every night for the Aaron Judge show,” he insisted. “(It’s) one of a kind right now.”

The next man tasked with denying a 50th homer is scheduled to be A’s right-hander Adam Oller (2-6, 6.41 ERA), who faced Judge twice in relief appearances in New York in June. Judge reached on catcher’s interference in their first head-to-head, before Oller struck him out two nights later.

Oller pitched a total of 2 1/3 innings in those games, allowing one earned run. After a scoreless eighth inning that included the Judge strikeout in the second duel on June 29, he was promoted to Oakland’s starting rotation, where he’s been ever since.

The 27-year-old is coming off a 3-0 home loss to the Miami Marlins on Monday in which he allowed all three runs in six innings. The A’s have totaled just nine runs in his six losses.

Oller would be wise to take the same approach as Oakland’s Friday starter, JP Sears, who served up Judge’s homer but no other runs in six impressive innings.

“The Yankees are a great team. It’s always good to face the best,” he insisted. “It’s just fun to face good teams and compete against the best. It was a fun night.”

In search of a sixth straight win, the Yankees hope righty Domingo German (2-2, 3.89) can follow up on his best effort of the year. It came in a 4-2 home win over the New York Mets on Monday, when he limited the rival to one earned run in a season-high 6 1/3 innings.