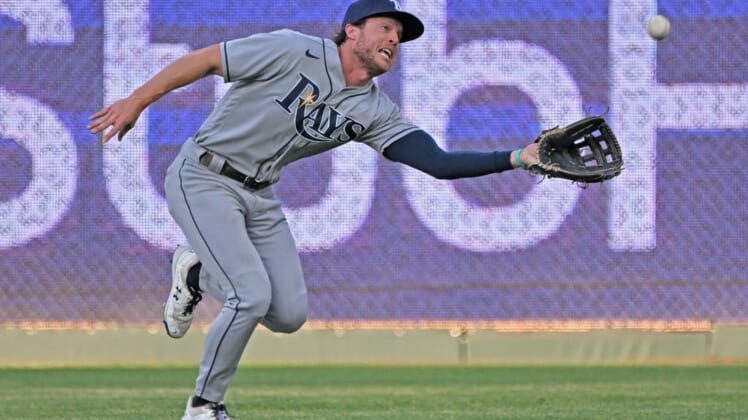 Diaz went 1-for-3 with a fourth-inning double that broke open a 2-1 game. He walked twice and drove in three runs.

Rasmussen (6-3) scuffled through five innings but only surrendered one run. In earning his first victory since beating the Miami Marlins on May 25, he scattered seven hits, walked one and struck out four.

Francisco Mejia was 2-for-4 with a double, two RBIs and two runs, while Brandon Lowe was 2-for-5 with an RBI. Brett Phillips had a hit, walked twice and scored two runs.

Tampa Bay is 17-5 in its past 22 games against the American League Central club.

Brad Keller (5-10) battled command issues throughout — plus a nose bleed — before leaving after four innings. He allowed five runs (four earned), with three of the five tallies reaching base via walk.

His wildness allowed the leadoff batter to reach base in the first three innings, but the visitors couldn’t cash in until the third when the right-hander walked Phillips — Keller’s third free pass.

Lowe’s single to center was booted by center fielder Michael A. Taylor, allowing Phillips to advance to third. Randy Arozarena then reached out and produced an RBI groundout for a 1-0 lead.

In the bottom half, Benintendi’s base hit to right drove in Lopez, who had singled and swiped second, but the Rays regained the advantage, 2-1, on Mejia’s hard chopper off Keller’s glove in the fourth.

A lengthy delay then occurred when Keller developed a bloody nose. Diaz made the pitcher’s night worse with a double that cleared the bases after Keller’s fifth walk loaded filled them.

Rasmussen didn’t breeze through the Royals lineup by any means.

The Royals put runners on base in all five of his innings, but Rasmussen became the pitcher of record with a double-play ball on his 94th pitch.

In the seventh, the home side cut it to 5-3 on Benintendi’s groundout and Hunter Dozier’s sacrifice fly, but the Rays immediately answered with RBIs from Mejia and Lowe.