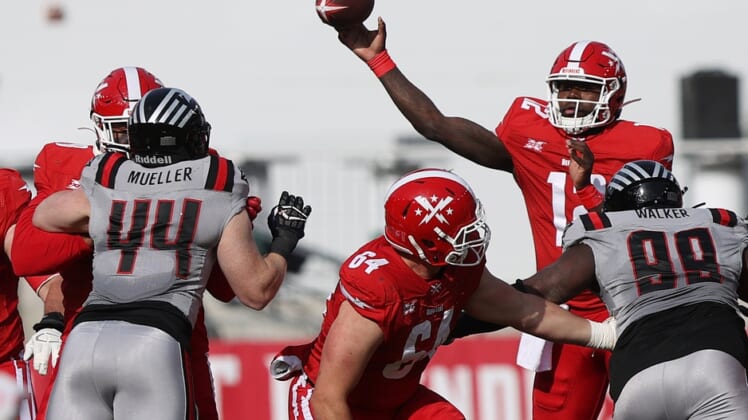 The XFL season is now fully underway with two weeks of action in the books and the shape of the league is already taking shape. We came away with plenty of key takeaways from this weekend’s action, which now paves the way for our latest XFL power rankings.

After two weekends of XFL football, the staggering difference in quarterback play between the teams is evident. The DC Defenders and Houston Roughnecks boast the two best passers in the league, making it no surprise they are both undefeated and atop the standings early in the season.

While the Defenders and Roughnecks are riding high with Cardale Jones and P.J. Walker, the same can’t be said for the New York Guardians and Tampa Bay Vipers. For as impressive as Jones and Walker have been the past two weeks, the quarterback play in New York and Tampa Bay is an eyesore for every football fan.

The teams in between are what will make the rest of this season fascinating to watch. We’ll see some surprises along the way and playoff spots are up for grabs, but currently there is a clear pecking order of contenders. Now let’s take a look at our XFL power rankings for Week 3.

The Defenders put on an offensive show in Week 1, but everyone knew this offense would be exciting with Jones. This past week, DC’s defense showed out with an incredible performance. The Defenders silenced New York’s offense and made Matt McGloin deliver one of the worst performances of his life.

If we keep seeing a defense like this, the Defenders might have a shot at an undefeated season. As for Pep Hamilton’s offense with Jones and receivers Eli Rogers and Rashad Ross, it’s just too good for XFL defenses. When it’s firing on all cylinders, this team is unstoppable and we expect a huge showing Week 3 in Los Angeles. We also can’t wait for the Week 7 matchup between the Defenders and Roughnecks.

This team needs to be carried by P.J. Walker, but he’s more than capable of doing it. While the 5-foot-11 quarterback needed 31 attempts to hit 170 passing yards, he finished with three-plus touchdowns for the second week in a row. Walker brings the excitement this offense needs, but it’s time for his teammates to step up.

It’s really Houston’s defense that nearly cost it this week. After Walker led the Roughnecks to a 21-6 lead at halftime, the defense promptly allowed two scores to make it a 21-18 game. Walker responded nicely with another touchdown, which proved to be just enough in a 28-24 win. We expect Houston to dominate the Vipers on Saturday and this team could rack up the wins for quite some time.

Credit to the BattleHawks for battling back and nearly knocking off one of the XFL’s best teams. Jordan Ta’amu continues to show incredible touch with the football and he’s the best dual-threat quarterback in the league. When the running game is clicking and Ta’amu is avoiding mistakes, opposing defenses run out of ideas to stop St. Louis.

There are still some areas of concern. For as well as Ta’amu looked at times, he also threw two interceptions. The BattleHawks’ defense also struggled to stop Houston and their strong Week 1 showing came against a backup quarterback. This is still an impressive team and Sunday’s matchup against the Guardians is an excellent opportunity to rebound with a win.

The Renegades are a different team with Landry Jones at quarterback. He certainly showed a lot of rust early against the Wildcats’ defense, which might be one of the worst in the XFL, but the Renegades’ performance in the fourth quarter stands out.

Bob Stoops unleashed Cameron Artis-Payne and he rumbled his way to 99 yards and two scores on 14 carries, averaging 7.1 yards per carry. Meanwhile, Jones delivered a 300-yard performance and cleaned up his accuracy in the second half. This is still a team with championship potential and a trip to Seattle, dealing with the best crowd in the league, will be a great litmus test.

We’re starting to buy into the Dragons. While they certainly took advantage of facing the worst team in the XFL, a win always counts and it puts this team in the playoff picture. When you watch this team play, its the defense and receiver Keenan Reynolds that routinely stand out.

Reynolds, the former Navy quarterback, delivered the biggest play of the game with an impressive 68-yard touchdown. He’s a threat whenever Seattle puts the football in his hands and his big-play ability is what the Dragons must depend on this year. Quarterback Brandon Silvers is the one holding this team back. A top quarterback makes the Dragons a top-three team, but Silvers must prove he can play at that level consistently before the Dragons climb up the power rankings.

The Wildcats fired defensive coordinator Pepper Johnson after their Week 1 loss, so at least Winston Moss didn’t fire anyone after his team dropped to 0-2. Los Angeles looked slightly better this week with Josh Johnson under center and that’s really where hope sits with this team.

This is not a good defense, that’s all there is to say. The Wildcats need Josh Johnson and Nelson Spruce to become an elite combo that can make explosive plays happen at any moment. If the Wildcats can’t score 24-plus points per game, they will continue to sit near the bottom of the power rankings because of the defense. In fact, Los Angeles might need to score 35 points next week to have any chance against DC.

The XFL wanted fans to see unfiltered moments from players with in-game interviews, Matt McGloin delivered. He threw his coaching staff under the bus at halftime, was caught on mic blasting his teammates in the third quarter and then blamed everyone but himself for being benched after his awful performance.

New York boasts an impressive defense. It forced the Defenders to go 2-for-6 inside the red zone and McGloin’s mistakes were largely responsible for the points DC scored. We’re a bit surprised McGloin remains on the team at this point and it would be a mistake if he’s allowed to start in Week 3.

The Vipers might be one of the worst football teams we’ve ever seen. Tampa Bay hasn’t scored a touchdown this year, a feat that almost seems as impressive as it is absurd. The XFL designed its rules specifically to create more scoring and Marc Trestman’s offense somehow can’t find the end zone.

Aaron Murray was awful in Week 1 and his replacement Taylor Cornelius was just as bad this past week. Trestman’s offense puts fans to sleep just as quickly as his halftime speech does for his players. Where there was once hope that this team could surprise, fans might now just be hoping the season ends very soon. It’s going to be rough to watch this team in Week 3 against the Roughnecks.