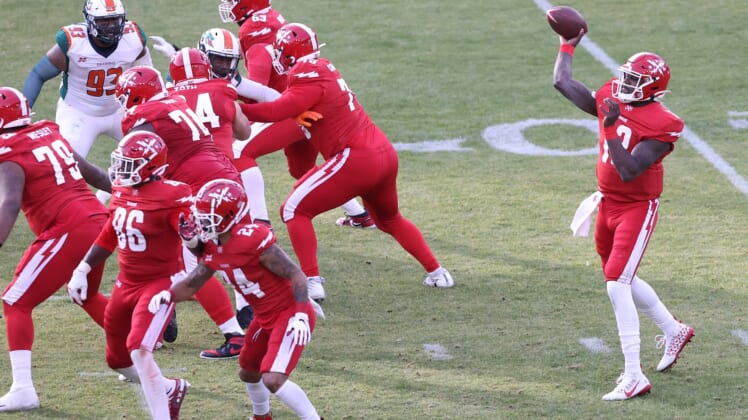 The XFL season is off and running after an exciting weekend to kickoff the 2020 campaign. We didn’t know what to expect in the inaugural season of the XFL’s reboot, but we came away impressed with a lot the league had to offer.

It started on Saturday with the DC Defenders proving to be the XFL’s best team out of the gate. As for the Dallas Renegades, our early favorite to win the XFL championship, they disappointed just like the Dallas Cowboys.

There were plenty of surprises from the XFL’s opening week, too. The Houston Roughnecks and quarterback P.J. Walker put on a show to become the biggest early surprise. Meanwhile, the New York Guardians and St. Louis BattleHawks came through with upset victories to kick off their 2020 seasons in style.

Now with the first week of the XFL season iin the books, we have statistics and performances to consider when evaluating teams. So, let’s take a look at our power rankings for Week 2 of the XFL season.

What an impressive performance by the Defenders in the XFL debut. Cardale Jones heard MVP chants when he took the field and he lived up to it with an outstanding performance. We’re particularly excited about the potential connection between Jones and receiver Rashad Ross. As the duo settles in, it could become the XFL’s version of Deshaun Watson and DeAndre Hopkins.

Everyone expected DC’s offense to deliver some excitement, but the defense and special-teams unit made strong impressions too. The Defenders’ defense racked up four tackles for loss, deflected nine passes and created three turnovers. Meanwhile, their punt return team blocked a kick and recovered it for a touchdown. If the defense keeps this up and Jones stays healthy, the Defenders can easily win a title and put another ring on Jones’ finger.

We had concerns about this team after it lost receiver Jalen Saunders, but Houston’s offense still found ways to rough up the Los Angeles Wildcats on Saturday. June Jones’ run-and-shoot offense is an absolute delight to watch and he might have found the perfect quarterback to execute it. P.J. Walker only needed one shot at a starting job in the XFL and now the former Temple star has become the MVP favorite.

Walker’s four-touchdown performance captured everyone’s attention. He showed impressive athleticism throughout the game, but his willingness to spread the ball around stood out even more. On the other side of the ball, the Roughnecks’ defense tore the Wildcats’ offense to shreds. Kony Ealy racked up five tackles for loss and the entire defensive unit racked up 16 quarterback hits. A Week 2 matchup against the St. Louis BattleHawks (1-0) will be fun, but we wouldn’t be surprised if Houston wins convincingly.

Talk about an emphatic New York entrance. While at times we were distracted by the Guardians’ incredible uniforms, we also saw their defense make Aaron Murray look like a high school quarterback. New York racked up eight quarterback hits, eight passes defended and shut down Tampa Bay’s offense on four red-zone trips. The Guardians’ defense might be the best sports fans have seen in New York this year.

We still have a few questions about this offense. Matt McGloin completed just 15-of-29 attempts and some missed opportunities cost this team a chance to put up even bigger numbers on Sunday. This is still a defense that can help carry New York to a playoff spot, but it will be hard to compete for a championship given some of the other performances we saw this week. We know McGloin is capable of greatness at this level, though, so we’re ready for the Guardians to march even higher up these power rankings as the season rolls on.

Something must be in the water in the city. Dallas’ football teams enter the year with tons of hype and championship aspirations, then the season arrives and everything falls apart. Nothing about the Renegades’ performance or even the entire game was pretty, but they also played without Landry Jones.

If Jones misses more time, then Dallas is absolutely in trouble. Philip Nelson wasn’t a turnover machine, but throwing for only 209 yards on 42 attempts is tough to watch. The talent at receiver and running back is in place for this to be an exciting offense and we believe Bob Stoops could unleash more of his scheme with his top quarterback under center. Reputation and hope keep Dallas in the No. 4 spot, but the bottom will fall out if Jones returns and they lose next week to Los Angeles.

The BattleHawks won an ugly one on Sunday, but they’ll take it as it puts them one step closer to a playoff spot. Jordan Ta’amu showed even more dual-threat ability than we saw at Ole Miss. The combination of Ta’amu and running back Matt Jones combined for 162 rushing yards and helped push this team to victory over our No. 1 team entering the season.

We still have some concerns. The XFL seems to be built for teams dominating through the air and putting up monster point totals, which isn’t something the BattleHawks are built for. St. Louis took advantage of the Renegades playing with their backup quarterback and it still just slipped by with a win. It would be great to see the BattleHawks prove us wrong, we want to see more epic celebrations, but next week’s road test in Houston will be challenging. If the BattleHawks pull out another win, they’ll soar up the power rankings.

It all comes down to the quarterback. Josh Johnson might be the most-talented player in the XFL, but his absence in Week 1 proved costly for the Wildcats. The Wildcats’ offense looked like a team with a backup quarterback who had little time to prepare, which is exactly the spot they were in.

Even when Johnson returns, though, this defense only registered two quarterback hits against Houston. Pressure is key to creating turnovers and forcing missed throws, so that is a needed area of improvement in Los Angeles. Sunday’s upcoming matchup against the Renegades, who will be getting Landry Jones back, will be pivotal for both winless teams.

Credit goes to the Dragons for putting up a fight in Week 1. Seattle ran the ball effectively and receiver Austin Proehl is already making big plays, but quarterback Brandon Silvers might not be the answer.

Silvers produced a complete dud performance, needing 40 attempts to reach 217 yards and he threw two interceptions. Seattle’s offense converted on just 4-of-15 third-down attempts and its defense deflected one pass. The Dragons aren’t a good team. The talent simply isn’t there to compete with the top teams and climb the power rankings. Maybe they can surprise, but we’re not expecting it from Silvers.

We talked about the Vipers being a wild-card result this season and their XFL debut showcased the worst-case scenario. Aaron Murray no longer belongs on the football field, as his performance on Sunday was tough on the eyes.

We’re also concerned about head coach Marc Trestman. He wasn’t cut out for the NFL and his first showing in the XFL provided the same feeling. Football fans deservedly roasted him for his weak decision down 17 and his decision to keep putting Murray out there was equally inexcusable. If Trestman doesn’t make Quinton Flowers the Vipers’ starting quarterback, the one player who brings excitement to this offense, the Vipers will stay in the XFL’s basement and at the bottom of our power rankings.