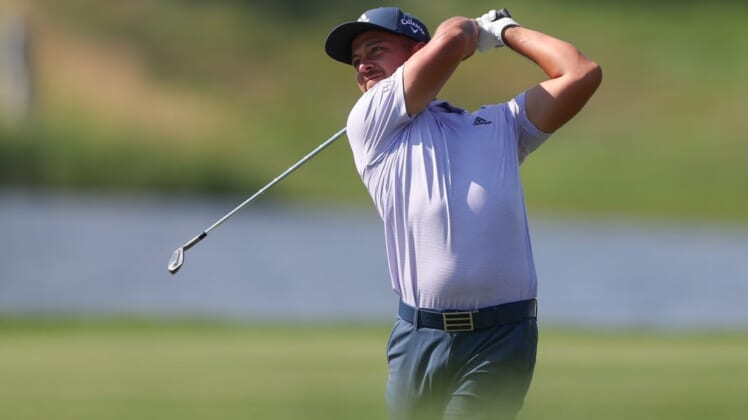 Xander Schauffele followed his low-round 65 from Friday by matching the best 18-hole score on Saturday, shooting a 66 to take a two-shot lead into the final round of the Genesis Scottish Open in North Berwick, Scotland.

After starting the tournament with a 2-over-par 72 on Thursday, Schauffele has compiled a 9-under score over the past two rounds to put him atop the leaderboard at The Renaissance Club at 7-under 203 through 54 holes.

Coming off a victory at the Travelers Championship two weeks ago, the 28-year-old San Diego, Calif., native is aiming to win back-to-back starts for the second time in his career.

Schauffele’s Saturday round could have looked even better, too. He followed his fifth and sixth birdies of the day on No. 15 and 16 with consecutive bogeys on the final two holes.

“Yeah, I had pretty much everything going,” said Schauffele, who is hunting his seventh career win and third of the season. “I was judging the bounces well and making, sort of, the putts I need to and getting up-and-down when I was missing the green. Six birdies through 16, no complaints, and a tough finish.

“I’ll go to the range, get some better feels going into tomorrow, but those are hard-finishing holes. So overall, pretty okay with the day.”

Rafa Cabrera Bello of Spain remains close behind at 5 under through three rounds after firing a 67 on Saturday. After making the turn at 1 over, he flipped his round in a scorching four-hole stretch — sinking an eagle on the par-5 10th hole, then dropping three straight birdies on Nos. 10 through 12.

Bello is searching for his first career PGA Tour win in his 138th start.

Jordan Spieth charged up 17 spots in the standings into a third-place tie at 4 under by matching Schauffele’s 66 on Saturday. He also eagled No. 10, then pulled the trick again on the par-4 15th by chipping it in from over 100 yards away.

“I think links golf is arguably my favorite kind of golf and I don’t know of any country that has more fantastic links courses than Scotland, obviously being the Home of Golf,” Spieth said.

“Rich history. It is the history in golf. It would be meaningful to win Scotland’s National Championship, but the fact that it’s now a co-sanctioned DP World Tour, PGA TOUR and Rolex Series Event — I think I just mentioned it earlier, having said that — it seems like it’s one of the biggest international events of the year.”

After leading the pack after the 18- and 36-hole benchmarks, Cameron Tringale struggled with a 74 to fall into a sixth-place tie at 3 under. He started well with an eagle on No. 3 and was 2 under through five holes, but bogeyed on six of his last 13 holes — including three in a row on Nos. 6 through 8.

Tringale, 34, is vying for his first PGA Tour trophy in his 332nd career start, the most without a win for any player on tour since 2009.

Alex Smalley carded a 67 Saturday to also match Tringale at 3 under, along with Englishman Matt Fitzpatrick (70).