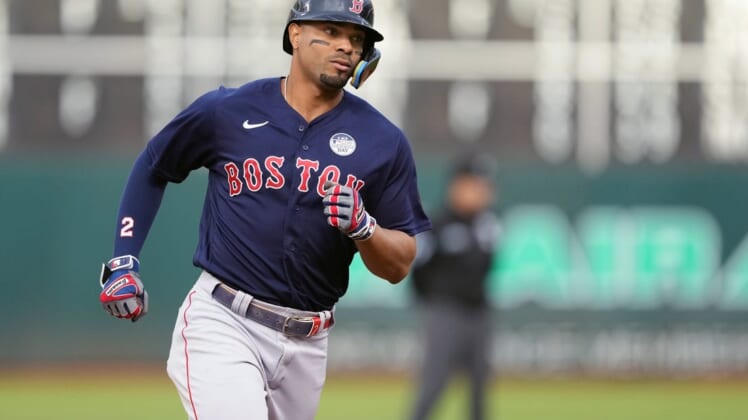 Xander Bogaerts celebrated a historic night with a home run, a double and three RBIs, Nathan Eovaldi worked six shutout innings and the visiting Boston Red Sox opened a three-game series with a 7-2 victory over the Oakland Athletics on Friday night.

Bogaerts set a Red Sox franchise record simply by taking the field in the bottom of the first inning, then belted a pitch by James Kaprielian (0-3) for a solo home run in the fourth to open the scoring.

The game was Bogaerts’ 1,094th at shortstop for the Red Sox, allowing him to surpass Everett Scott’s record that had stood for 101 years. The home run was his sixth of the season.

The Red Sox added another run in the fourth on an RBI double by Franchy Cordero. They scored twice in the sixth on a double by Trevor Story, giving Eovaldi and four relievers all of the runs they would need to deliver Boston a second straight win.

Eovaldi (3-2) limited the A’s to four hits and one walk in his six innings. He struck out eight.

The A’s did their scoring against the bullpen in the eighth when Cristian Pache and Ramon Laureano drew walks and scored on a Jed Lowrie double, closing the gap to 4-2.

But the Red Sox added three insurance runs in the ninth. Rafael Devers had an RBI double before Bogaerts rapped a two-run double.

Kaprielian was pulled with two on and one out in the sixth inning, charged with four runs on five hits. He walked two and struck out one. Story’s two-run double greeted Kaprielian’s replacement, Parker, Markel.

Bogaerts, Story and Enrique Hernandez had two hits apiece for the Red Sox, who were tipping off a 10-game Western swing. Alex Verdugo scored twice.

Lowrie finished 2-for-4 with two RBIs for the A’s, who lost their fourth straight and seventh in their last eight.