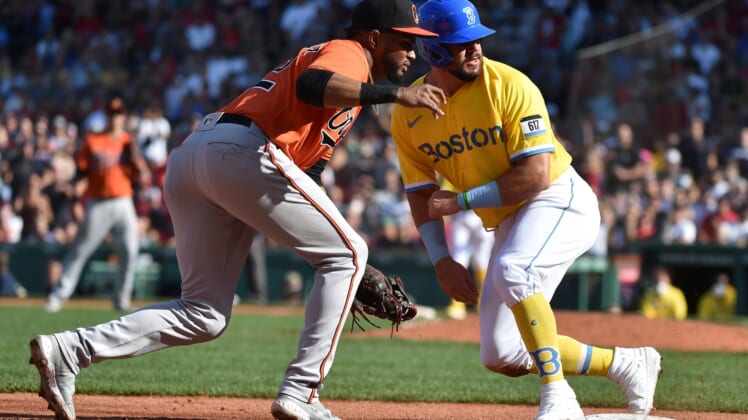 Xander Bogaerts belted a three-run homer to highlight his three-hit performance as the Boston Red Sox extended their winning streak to four games with a 9-3 victory over the visiting Baltimore Orioles on Saturday.

Rafael Devers had three hits and scored three runs for the Red Sox (85-65), who hold the top wild card in the American League with 12 games to play.

Ryan Mountcastle and Austin Wynns each homered for Baltimore (47-101), which has lost 11 of its last 12 games against Boston.

The Orioles took a short-lived lead in the first on Mountcastle’s two-run homer off Nick Pivetta, who allowed three runs on seven hits over 3 2/3 innings.

Boston responded with three runs in the bottom half of the inning against Zac Lowther.

Devers singled in a run with one out and Boston loaded the bases with two out before Bobby Dalbec delivered a two-run double off the left-field wall.

Baltimore tied the game in the second on Wynns’ homer, his fourth of the season.

Lowther gave up three runs on five hits over 3 1/3 innings. He walked two and struck out two.

Boston manager Alex Cora pulled Pivetta with two outs and a runner at third in the fourth. Darwinzon Hernandez entered and retired Cedric Mullins on a liner to right to end the inning.

Bogaerts put the Red Sox ahead 4-3 in the fifth inning when his single off Mike Baumann (1-1) scored Devers, who had doubled with one out.

Boston pulled away with four runs in the sixth inning. Enrique Hernandez began the rally with a two-out single and scored on Hunter Renfroe’s double.

Devers followed with a single to left field before Bogaerts crushed a first-pitch fastball from Baumann over the left-field wall.

Mullins had two hits and two stolen bases for Baltimore, which became the first team to lose 100 games this season on Friday.

Boston, which recorded 14 hits, added a run in the seventh inning after Kyle Schwarber scored from third on Christian Vasquez’s double-play grounder.