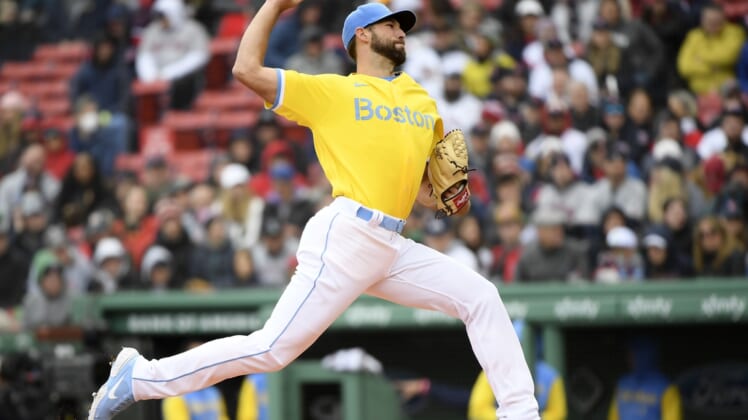 Xander Bogaerts went 3-for-4 with the RBI single that started the scoring in Boston’s sixth-run eighth inning on the way to an 8-1 Red Sox win over the visiting Minnesota Twins on Sunday.

Rafael Devers extended his hitting streak to all nine games this season on a 2-for-4 day with two runs scored for Boston, which has won four of its last five games and two of three in its current four-game series with Minnesota.

The Red Sox blew the game open with six runs on seven hits in the eighth.

Boston starter Michael Wacha was strong despite not factoring into the decision, striking out five while allowing no runs, one hit and two walks in five innings.

Matt Strahm earned the win after 1 1/3 innings of relief before Ryan Brasier, Jake Diekman and Austin Davis pitched scoreless ball over the final 2 2/3.

Boston broke a scoreless tie with two runs in the sixth. To set the table, Devers reached base on a line drive that glanced off Twins first baseman Miguel Sano’s glove before Bogaerts narrowly missed his second home run in as many games on a double to high off the Green Monster in left field. Martinez and Alex Verdugo knocked in one run apiece on sacrifice flies.

Bailey Ober (1-1) allowed just the two runs — both unearned due to the error — on four hits and struck out three in six innings in his second start for the Twins.

Minnesota got one run back in the seventh as Max Kepler hit a one-out single to left and scored on Trevor Larnach’s sacrifice fly two batters later. Gio Urshela had two of the Twins’ four hits.

The Sox sent four batters to the plate before reliever Caleb Thielbar recorded an out and was then pulled in the busy eighth.

Hernandez hit a leadoff single to center and moved to third on a Devers line drive up the middle. Bogaerts drove in one on an infield knock before Martinez ripped his 300th career double high off the wall in center.

Against Cody Stashak, Story hit a one-out, two-run single through a drawn-in infield to further extend the Boston advantage to 6-1.