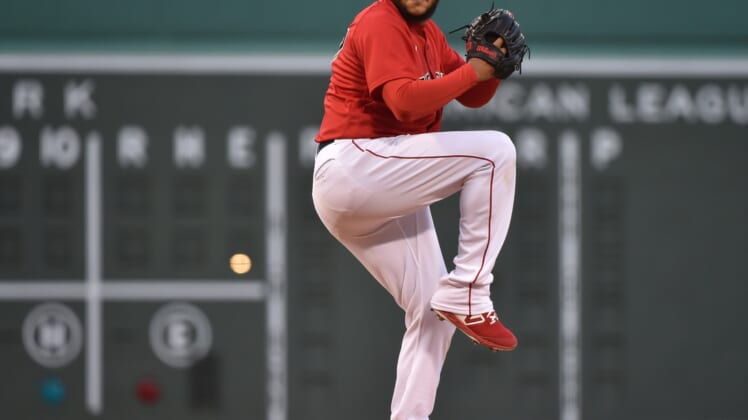 Bogaerts also had a double in the opener of a two-game set. Bobby Dalbec added an RBI triple to cap a four-run fourth inning and Christian Arroyo had three hits for Boston.

Bo Bichette and Randal Grichuk each hit solo home runs and a single, accounting for all four of the Blue Jays’ hits.

Rodriguez (3-0) allowed two runs, three hits and one walk in six-plus innings. He struck out six.

Matt Barnes pitched around a one-out infield single in the ninth inning to earn his third save of the season.

Blue Jays left-hander Hyun Jin Ryu (1-2) allowed four runs and eight hits in five innings. He struck out two and did not allow a walk in his shortest outing of the season.

Bichette led off the fourth inning with his fifth home run of the season.

Arroyo singled to open the bottom of the fourth, the third successive inning that Boston had its first batter reach base.

J.D. Martinez followed with a single and Bogaerts hit his first homer of the season to left on a 1-2 fastball. Marwin Gonzalez doubled with one out and scored on Dalbec’s first career triple, a drive to center.

Ryu overcame a double and an error in the fifth to avoid a second straight disastrous inning. Joel Payamps replaced him in the sixth and allowed one hit in 1 2/3 innings.

Grichuk led off the seventh with his second home run of the season and Rodriguez was subsequently replaced by Matt Andriese.

Anthony Castro replaced Payamps after Arroyo’s two-out infield single in the seventh and struck out Martinez.

Before the game, the Blue Jays placed right-hander T.J. Zeuch (shoulder tendinitis) on the 10-day injured list. Santiago Espinal was recalled from the club’s alternate training site and started at third base, going 0-for-2.