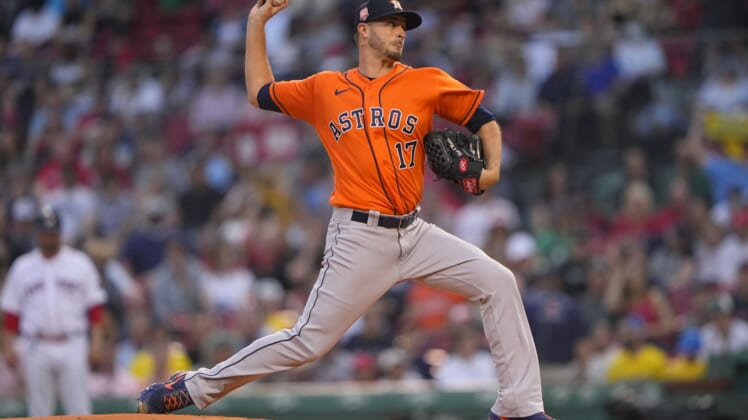 Xander Bogaerts homered during Boston’s three-run eighth inning and Enrique Hernandez and J.D. Martinez both went 2-for-4 as the Red Sox defeated the visiting Houston Astros 6-3 on Monday night.

Hernandez doubled down the left field line and traded places by scoring the go-ahead run on Martinez’s double into the left-center gap two batters later. Bogaerts added key insurance with a towering two-run homer over the Green Monster.

Matt Strahm (2-1) won in relief, working 1 2/3 scoreless innings of one-hit ball. He struck out three and walked none.

Hansel Robles tossed a scoreless ninth for his second save.

Michael Brantley (2-for-4) and Chas McCormick (2-for-3, home run) had multiple hits for the Astros.

Astros starter Jake Odorizzi collapsed as he came off the mound to cover first base on the grounded that ended the fifth inning, and he was stretchered off the field. The team later announced that he was dealing with lower left leg discomfort.

Odorizzi threw five innings, allowing two runs (one earned) on three hits and a walk. He struck out four.

The Red Sox broke a scoreless tie in the fourth inning.

Hernandez hit a leadoff single and Martinez followed with a one-out single to right. After Bogaerts walked, McCormick couldn’t catch Alex Verdugo’s fly ball to shallow center, and Hernandez scored on a RBI forceout of Martinez at third.

Houston knotted the score in the fifth on McCormick’s leadoff homer into the final section of Green Monster Seats in center field.

Boston moved on top again in the bottom of the fifth when Franchy Cordero scored on a passed ball after doubling to left.

Boston relievers Jake Diekman and John Schreiber combined to strand a runner on third, ending the inning before a 1-hour, 38-minute rain delay.

The Astros jumped ahead in the seventh as Jose Altuve’s ground-ball single through the middle scored Jason Castro, who had doubled.

Houston’s first lead was short-lived as the Red Sox tied the score at 3-3 in the bottom of the inning on Story’s first homer of the season at Fenway Park. It was his second long ball overall.