15 underrated NFL free agents who will be absolute steals

There is a ton of cash to spend by NFL teams this spring as free agency kicks into high gear. Players like Kirk Cousins and Allen Robinson are going to haul in what will be humongous deals, yet there are NFL free agents out there who are flying under the radar — guys who’ll end up being tremendous bargains in hindsight.

Big-money, long-term deals are often looked at in hindsight as big mistakes. Oftentimes, it’s the complementary signings that end up having the biggest impact. Those are the players we’re going to look at right now.

These NFL free agents won’t haul in monster deals. But they have the potential to make all the difference for the teams that sign them ahead of the 2018 NFL season.

A former fifth-round pick out of Temple, Whitehead is coming off the best year of his career and is just entering his prime — he’ll be 28 when the season begins. When Detroit brought in Jarrad Davis last year in the draft, Whitehead moved over to the weak side and thrived. He made 110 tackles while tallying a sack, an interception and scooping up four fumbles. Whitehead isn’t going to wow you in the passing game like the top linebackers in today’s NFL, lacking elite speed. But he is a savvy veteran who has good instincts and who is darn good against the run. He’s going to end up starting somewhere in 2018, and he won’t break the bank.

Versatility is such a huge plus in the NFL, and Kelemete embodies it — he can play four positions on the offensive line, with left tackle being the only spot he can’t fill. In fact, this past season he literally did play all four other positions on the line for the New Orleans Saints. The past three years, Kelemete has started 22 games, proving to be extremely valuable to the Saints. Now, assuming New Orleans can’t afford to keep him or is looking to get younger, he’ll be extremely valuable to another franchise in 2018.

A player who doesn’t get a ton of love outside of people who study film for a living, this pint-sized slot specialist is dynamite. Coming in at 5-foot-7 and 169 pounds, he was an undrafted free agent out of USC in 2013. He landed with the Buffalo Bills before coming to the Los Angeles Rams in free agency last year. An extremely versatile player, he’s started 19 games in his career and played in 79, racking up five interceptions, five sacks and three defensive touchdowns. He’ll be a very affordable option for a team looking to upgrade its secondary and land an impact player this spring. 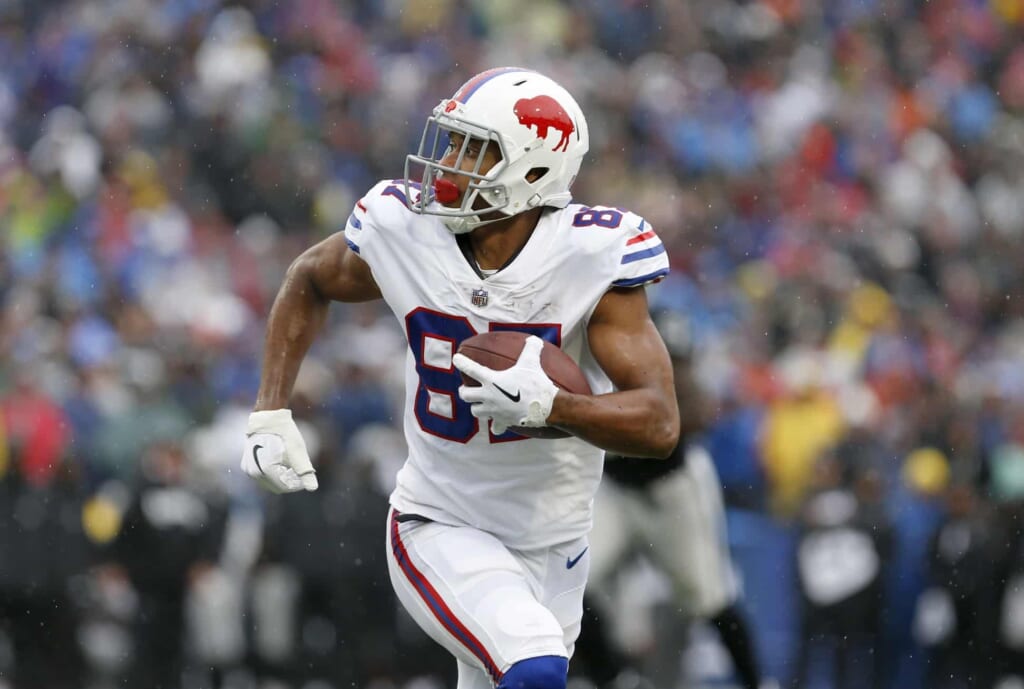 Last year was nothing short of disastrous for Matthews, who was not only traded away from the eventual champion Philadelphia Eagles but who also had his worst season as a pro. Matthews caught just 25 passes for 282 yards and one touchdown for the Buffalo Bills, appearing in 10 games and earning just seven starts. It’s definitely worth noting that Matthews suffered through three surgeries last year, and he blames Philly’s medical staff for failing him in this regard. Matthews is also coming into free agency with a huge chip on his shoulder and does have a history of making big plays in the NFL. If he’s healthy, then he’ll be a bargain and could have a monster 2018 campaign.

Though Brown isn’t a huge playmaker in the mold of Luke Kuechly, he is low-key one of the most consistent, productive inside linebackers in the game right now. Since being selected by the Buffalo Bills in the third round of the 2014 NFL Draft, all he’s done is start 62 games, rack up 505 tackles, three interceptions, two forced fumbles, four fumble recoveries, one sack and one defensive touchdown. Like the others on this list, Brown is going to be an affordable option for a cap-strapped team looking to upgrade its linebacking corps. For what it’s worth the Green Bay Packers should probably give him a call ASAP.

Last year must have been maddening for Crowell and Duke Johnson, neither of whom was utilized properly or with any real consistency by Hue Jackson and the Cleveland Browns. In fact, Crowell made it clear a couple of times that he was very frustrated by it all. Still, we’re talking about a young running back — Crowell is just 25 years old — who has a career average of 4.2 yards per carry, who has the burst to go for long gains (like this), who is very good at catching the ball out of the backfield and who scored 22 touchdowns in four seasons with Cleveland. He’s going to have a huge season with a new team as a featured back, and he’ll be very affordable.

The Los Angeles Chargers would be absolutely foolish to allow Boston to bolt for greener pastures. The former fourth-round pick of the Carolina Panthers had a breakout campaign for them last season after signing a one-year deal in free agency. He intercepted five passes and tallied 79 tackles, showing excellent skills on the back end. And at the age of 25 he’s still trending up. The trouble is that Los Angeles isn’t in the best shape concerning the cap, so Boston could end up signing elsewhere. If he does, the Chargers will have a tough time replacing his steady production. 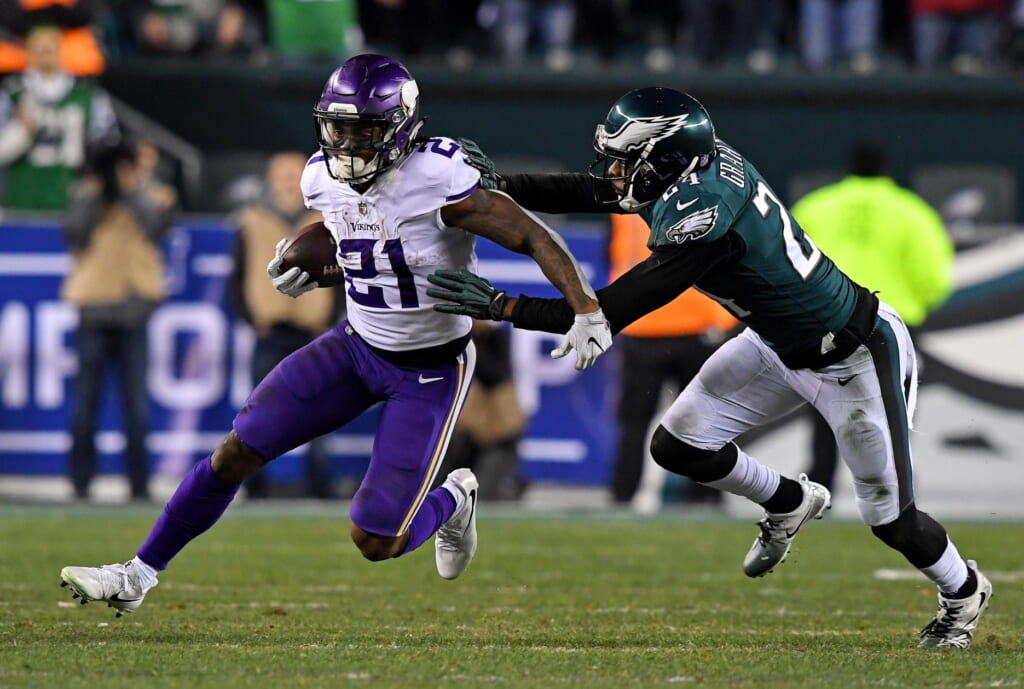 It’s tough to gauge just how good McKinnon can be as a pure running back. After all, he’s been a complementary back for the first four years of his NFL career, and the past two years Minnesota has featured a terrible run-blocking offensive line. Still, we do know that McKinnon has showed the ability to flash for huge gains on the ground, and that he’s an exceptional pass-catching back. At the least, he’s a tremendous change-of-pace, third-down specialist who can make a big difference. At best, he’s going to be a breakout starter for a team willing to give him a shot to be THE guy — a shot he feels he deserves.

There aren’t many situational pass rushers in this year’s class of free agents who have the potential to wreak havoc as consistently off the edge as Murphy. He missed the entire 2017 season after suffering a torn ACL, and he was hit with a four-game ban after testing positive for PEDs. So Murphy is going to be a huge bargain this spring in free agency. Especially because this guy had nine sacks for Washington in 2016 as a role player and should make a similar impact for a team in need of such a player in 2018.

Often overlooked due to the fact that Philly has Zach Ertz roaming the middle, Burton is an extremely athletic tight end who has the potential to have a tremendous impact in the right situation. Last year, he caught just 23 passes for 248 yards, but he hauled in five touchdown passes. He also was responsible for making one of the most important passes in Eagles history during Super Bowl LII (watch here). A former undrafted rookie out of Florida in 2014, Burton won’t break the bank but could break out in a huge way next season in a featured role.

Since being selected in the fourth round of the 2014 NFL Draft, Breeland has started 57 games for Washington and has been its most consistent cornerback. There have been some ups and downs for him so far, but some of that has to do with the fact that Washington has been very unstable up front. Breeland is a very good cover corner with solid ball skills — he has eight interceptions and 59 pass break-ups in four years. Likely viewed as a second-tier free agent, Breeland is going to be an affordable No. 2 cornerback who can come in and immediately make a positive contribution.

Richardson sent out a tweet on Saturday that suggests he knows he’s not part of Seattle’s plans going forward. Assuming he signs with another team, we should expect him to land a deal similar to the one Marquise Goodwin signed with San Francisco, which frankly is a tremendous bargain. Possessing freakish tracking abilities and hands (check out this insane catch), this guy is a difference maker. He caught 44 passes for 703 yards and six touchdowns last season, and he could just be scratching the surface of his pro capabilities. 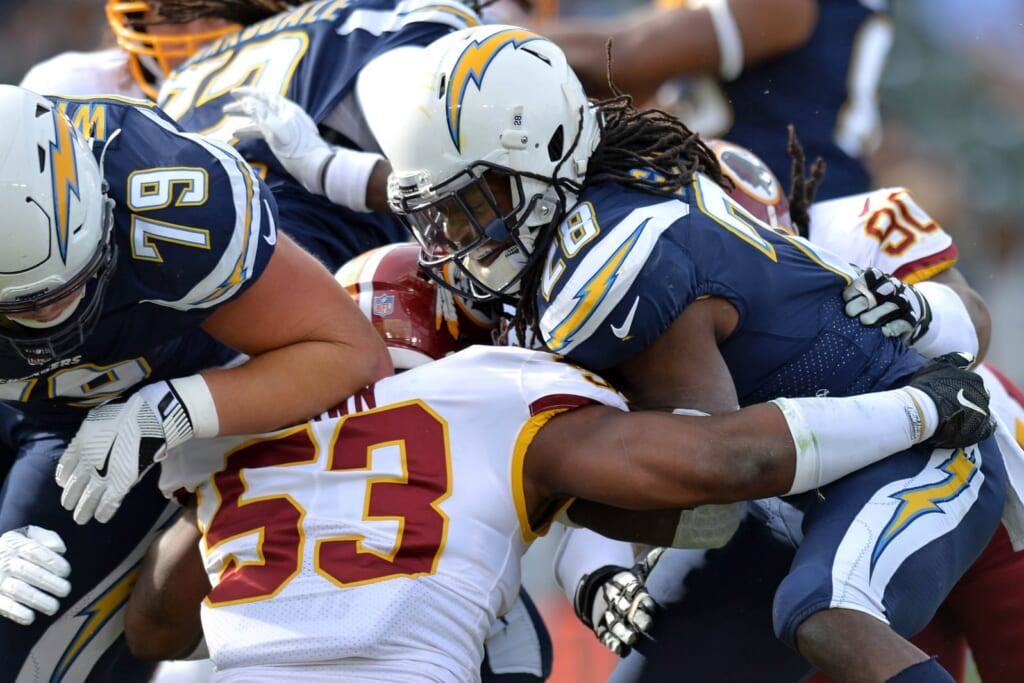 Teams looking for a playmaking tackling machine need look no further than Brown, who’s been making an impact ever since his rookie campaign with Tennessee back in 2013. A knee injury cut his stellar 2017 season short in Washington, where there’s reportedly mutual interest in him returning. An instinctive, quick linebacker who attacks ball-carriers with fury, Brown won’t likely land a huge contract due to injury concerns. But if he’s healthy there’s every reason to believe he’ll once again be among the league leaders in tackles in 2018. He’ll also make a few huge plays in the passing game, both as a blitzer and picking off balls in passing lanes.

The 2017 season was a humbling experience for Pryor, who was benched in Washington and ended up being nothing more than an afterthought. But we cannot discount the fact that he went over 1,000 yards the year before in Cleveland, playing with some pretty awful quarterbacks, no less. There is a pretty strong rumor out there that the Browns are interested in bringing Pryor back, too, and given their depth at receiver now he could be a very dangerous option as a No. 3 guy. One thing we know for sure is that, after this past season, he’s not going to land a big contract. So he could end up being one of the biggest steals of free agency this time around.

It’s understandable that Bridgewater is flying under the radar right now. Kirk Cousins, Case Keenum, Nick Foles and AJ McCarron are the top available guys this spring, and Bridgewater’s injury history is too blatant to ignore. But let’s not forget that, before his injury, Bridgewater was coming on very strong as one of the NFL’s top young quarterbacks. He was having a tremendous camp for Minnesota before suffering the injury that nearly took his life, and he’s barely seen the field in the two seasons since then. With all that in mind, it’s likely that Bridgewater will sign a short-term prove-it deal this spring. But assuming he’s able to put the past behind him and get back on track, he’ll be one of the biggest bargains in football this upcoming season.