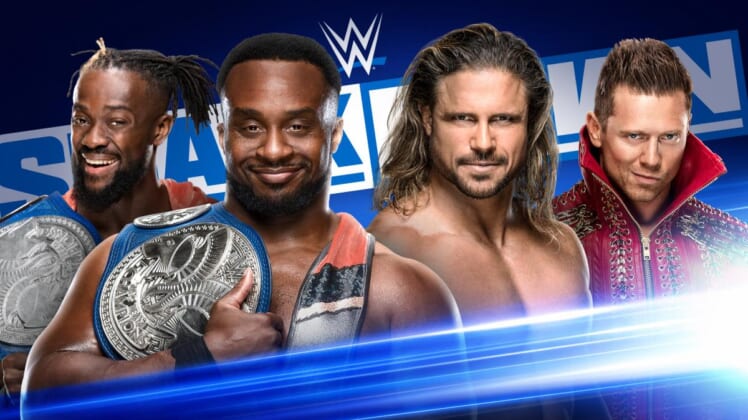 The Royal Rumble is almost upon us and the Smackdown brand has continued its march to the first major pay-per-view of 2020. With multiple returning superstars for Christmas, fans where left wondering last week how the returning Uso’s and John Morrison would be utilized.

Last week we got some answers and the direction on where these returning superstars and the Smackdown brand is headed going into the Royal Rumble on Sunday, January 26 at 7pm EST in Houston, Texas.

Morrison returned last week and is aligning with his former tag team partner, the now heeled Miz. They seemed to be headed towards a Tag Team Title feud against The New Day.

Back in the saddle: Morrison helped The Miz defeat Kofi Kingston on this week’s Smackdown and will make his return to the ring against fellow New Day member Big E on the next episode of Smackdown.

Inevitable: This will lead to a Tag Team Title Match most likely at the Royal Rumble between The Miz and John Morrison taking on Smackdown Tag Champions, The New Day.

Disappointing: This is not the direction I saw Morrison headed upon his return to the WWE. His return should have been given more attention, recognition, and a unique storyline. The pairing with his old tag team partner from 10 years ago is another example of the lack of creativity the WWE has been giving us for many years.

One of the most entertaining segments week after week has been Mandy Rose and Heavy Machinery member Otis in an apparent love angle.

The Mandy/Otis love connection has been much more enjoyable to watch than Lacey Evans and Bayley’s lackluster feud.

What’s next: The culmination of their feud will be on display at The Royal Rumble and should end this feud and allow both performers to move on to their next opponents.

Already Dead: Where does Bray Wyatt go from here if he defeats Daniel Bryan at The Royal Rumble? You may just see a return of the legendary Undertaker to face off with The Fiend at WrestleMania 36.

The storyline is ripe for the picking and would be a legendary way to retire The Undertaker and make Bray Wyatt a legend in the process.

Where’s your crown King Nothing?

Once again, closing the show was the continued feud of Roman Reigns and the newly returned Uso’s against Reigns’ long time rivals, King Corbin and Dolph Ziggler.

Recap: King Corbin and Ziggler defeated the returning Uso’s due to outside interference from a returning Robert Roode to continue this feud. Roode was given a 30-day suspension for his violation of the WWE’s wellness policy and the WWE wasted no time getting Roode in the mix again.

Survey says: This feud will continue all the way to The Royal Rumble where Reigns and Corbin will have another match to continue their rivalry.

Six million dollar men: Will we have a six-man match this week on Smackdown between these opposing factions? Will this feud end at the Royal Rumble? My answer is yes to both questions. We will have this six-man match before the Royal Rumble and Reigns will move on to another marque match at the biggest show of the year.

What are your thoughts on the direction of the Smackdown brand as we inch closer to The Royal Rumble? Where do you see the superstars of Smackdown headed into the first major WWE show of the year? WrestleMania season starts now and as a wrestling fan for over 30 years I always get excited for the next few months.

What surprises are in store for us? WWE usually delivers on some fun and interesting storylines this time of year. So buckle up and enjoy the ride because the Royal Rumble is coming soon to kick off WresleMania which takes place on April 5, 2020 in Tampa, Florida.