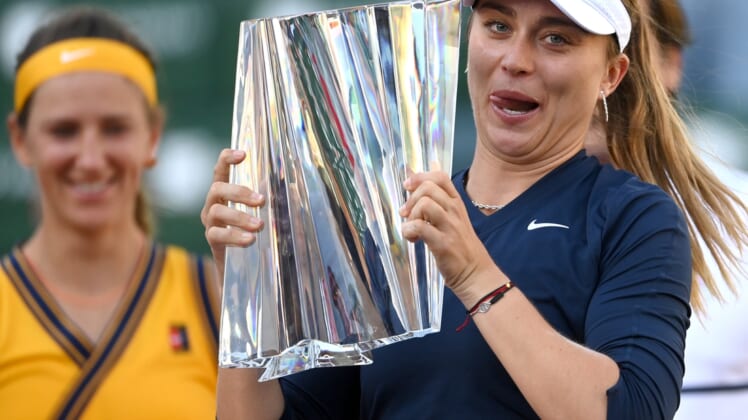 Victoria Azarenka of Belarus smacked 24 winners while producing a 6-3, 6-2 victory over fourth-seeded Paula Badosa of Spain on Tuesday in the Adelaide International 1 in Australia.

It was the first match for former world No. 1 Azarenka since she lost a marathon three-setter to Bodosa in the Indian Wells final in mid-October. Badosa had 20 winners but was hurt by four double faults.

In another first-round match, Marie Bouzkova of the Czech Republic was a 6-3, 6-0 winner over Despina Papamichail of Greece.

Vera Zvonareva of Russia knocked off ninth-seeded American Alison Riske 7-5, 6-3 to advance to the second round in Melbourne.

Among other matches, No. 6 Viktorija Golubic notched a 7-5, 6-1 victory over American Lauren Davis.

Fifth-seeded Sorana Cirstea of Romania needed just 49 minutes to finish off a 6-0, 6-0 rout of Russia’s Varavara Gracheva to advance to the second round in Melbourne.

Fourth-seeded Sara Sorribes Tormo of Spain advanced with a 6-4, 5-7, 6-3 victory over Brazil’s Beatriz Haddad Maia. Sixth-seeded Clara Tauson of Denmark posted a 7-5, 6-3 win over Anhelina Kalinina of Ukraine, and seventh-seeded American Ann Li rolled to a 6-2, 6-0 triumph over Mayar Sherif of Egypt.