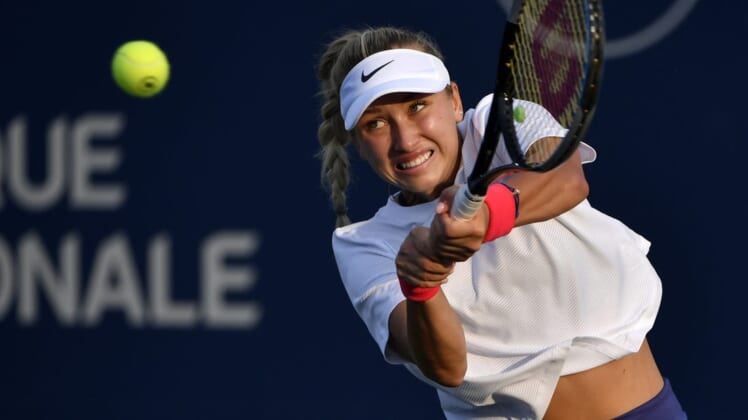 No. 5 seed Caroline Garcia of France scored her first career knockout of a No. 1-ranked player Friday with a 6-1, 1-6, 6-4 quarterfinal upset of top-seeded Iga Swiatek of Poland at the Poland Open in Warsaw.

Swiatek, the French Open champion, had only dropped two sets while compiling an 18-0 record on clay courts this season. Garcia’s opponent in the semifinals will be No. 10 Jasmine Paolini of Italy, who rallied for a 1-6, 6-2, 6-2 win against Switzerland’s Viktorija Golubic.

Unseeded Ana Bogdan of Romania and Kateryna Baindl of Ukraine will meet in the other semifinal. Bogdan saved four of five break points in a 6-1, 6-1 defeat of Brazil’s Laura Pigossi, while Baindl withstood nine aces in a 1-6, 6-3, 6-4 victory against No. 8 Petra Martic of Croatia.

No. 7 seed Anastasia Potapova of Russia cruised into the semifinals with a 6-1, 6-1 demolition of top-seeded Anett Kontaveit of Estonia.

Potapova, who never faced a break point in the 51-minute match, will meet China’s Qiang Wang in the semifinals. Wang outlasted Poland’s Magda Linette 7-5, 6-7 (5), 6-4 in just over three hours.

No. 8 seed Marie Bouzkova will face Czech compatriot Linda Noskova in the other semifinal. Bouzkova defeated Russian teenager Oksana Selekhmeteva 6-3, 6-0 and Noskova was leading 6-3, 4-2 when Japan’s Nao Hibino was forced to retire.