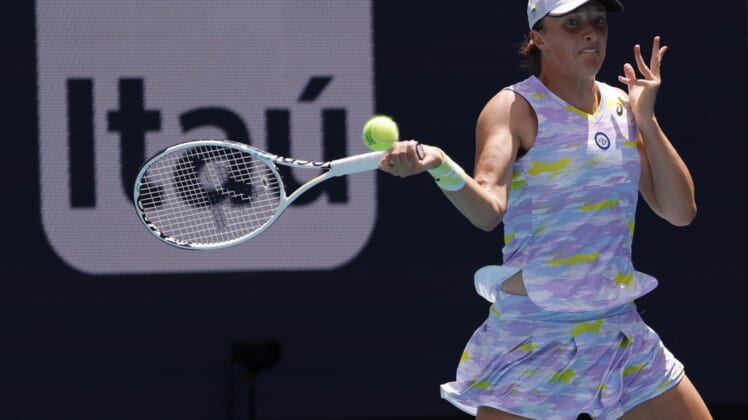 Iga Swiatek of Poland showed why she is the World No. 1, defeating Aryna Sabalenka 6-2, 6-2 on Sunday in the championship match of the Porsche Tennis Grand Prix at Stuttgart, Germany, to capture her fourth consecutive title.

With her victory, Swiatek now has won 23 straight matches. She is 30-3 on the season and needed just 84 minutes to win her seventh career championship.

The top-seeded Swiatek won 77.8 percent of her first-service points on the day and never dropped her serve. For the third-seeded Sabalenka, of Belarus, her serve was a different story. She won just 61.5 percent of her first serves and committed six double faults. She also saved only four of eight break points.

Swiatek, 20, now has defeated the 23-year-old Sabalenka in two of their three career meetings. Sabalenka is ranked No. 4 in the world.

Potapova took just 83 minutes to secure her first title in three finals. Trailing 3-1 in the opening set, Potapova won eight straight games and 11 of the final 12.

For the 21-year-old Potapova, it was her first win over a player ranked in the Top 30. Kudermetova is ranked No. 29; Potapova entered the week at No. 122.

She became the first woman in 2022 to achieve her maiden victory.