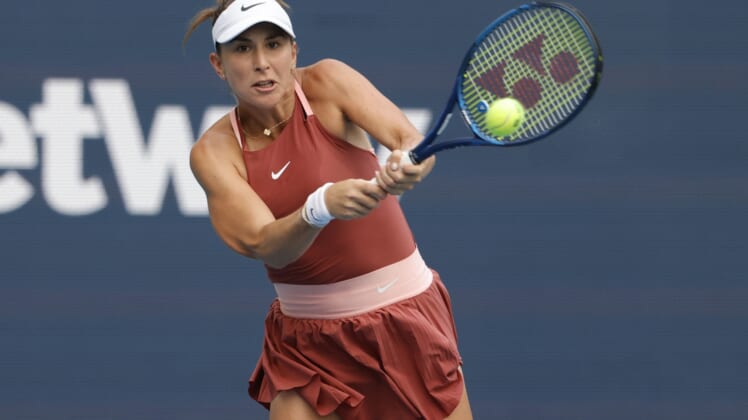 No. 10 seed Belinda Bencic of Switzerland took down second-seeded Paula Badosa of Spain 2-6, 7-6 (2), 6-4 in two hours and 47 minutes Friday to advance to the semifinals of the Charleston Open in Charleston, S.C.

Bencic saved 10 of 14 break points, while Badosa saved seven of 10. Badosa won a break point in the third set that tied it 3-3, but Bencic won the following game in just six points to regain control the rest of the way. The reigning Olympic gold medalist is back in a semifinal round after losing to Japan’s Naomi Osaka in the semifinals of last week’s Miami Open.

Bencic will face Ekaterina Alexandrova of Russia on Saturday in the semifinals after Alexandrova defeated Poland’s Magda Linette 6-0, 6-2 in an hour and two minutes.

Fourth seed Ons Jabeur of Tunisia cruised into the semis by beating Ukraine’s Anhelina Kalinina 6-3, 6-2. Jabeur won 29 of 36 first-service points and is now set to face No. 15 seed Amanda Anisimova, who won an all-American match against Coco Vandeweghe 6-1, 6-2.

Camila Osorio of Colombia continued to cement herself as the favorite with her 6-1, 6-4 win over Elina Avanesyan of Russia on Friday in Bogota, Colombia.

Not only is she playing in her home nation, Osorio is the No. 1 seed in the draw and no other seeded players are left standing.

In the other semifinal, Kamilla Rakhimova of Russia will battle Tatjana Maria of Germany. Rakhimova endured a 6-3, 4-6, 6-2 win over Romania’s Irina Bara, while Maria swept Sweden’s Mirjam Bjorklumd 6-1, 6-4.