Top-seeded Ashleigh Barty breezed into the semifinals at Wimbledon with a 6-1, 6-3 victory over fellow Australian Ajla Tomljanovic on Tuesday in London.

Barty sealed the emphatic win with her fourth ace to become the first Australian woman to advance to the semis at Wimbledon since Jelena Dokic in 2000.

Barty was quick to pick up Tomljanovic after the 66-minute match.

“We are Fed Cup teammates and she always brings out the best in me,” Barty said of Tomljanovic. “All Aussies back home are bloody proud of her and it was a pleasure to share the court with her today.”

Barty’s victory set up an encounter against German Angelique Kerber, who cruised to a 6-2, 6-3 win over 19th-seeded Karolina Muchova of the Czech Republic.

“I love playing Angie, she knows her way around this court,” said Barty, who has split four head-to-head meetings with Kerber.

Kerber has been on a hot streak since winning the title at the inaugural Bad Homberg event in her home country.

“I just try to continue my play on grass,” Kerber said. “Having, of course, the confidence from the last week, coming here with a title in my bag, gives me also confidence that grass is really my surface.” 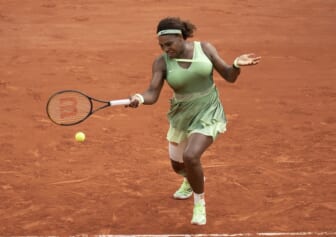 Also Read:
Serena Williams will not compete in Tokyo Olympics

Also on Tuesday, Karolina Pliskova of the Czech Republic advanced to the Wimbledon semifinals for the first time with a convincing 6-2, 6-2 victory over Viktorija Golubic of Switzerland.

Pliskova, who has yet to drop a set in the tournament, fired eight aces to keep Golubic on her heels.

“My serve was extremely good today, I would say,” the 29-year-old Pliskova said. “Also the court was hard because it was a bit windy out there today. These conditions are perfect for me. I’m happy about the win.”

Pliskova advanced to face No. 2 seed Aryna Sabalenka, who reached her first major semifinal with a 6-4, 6-3 win over No. 21 Ons Jabeur of Tunisia.

Sabalenka, 23, recorded 26 winners and used her power game to win the match in 73 minutes. She became the third Belarusian woman to advance to the Wimbledon semifinal round, joining Natasha Zvereva (1988) and Victoria Azarenka (2011, 2012).

Seventh-seeded Bernarda Pera cruised to a 6-1, 6-2 victory over Poland’s Katarzyna Kawa in the first round of the tournament in Germany.