Anett Kontaveit wasted no time advancing to the semifinals of the WTA Finals at Guadalajara, Mexico, on Friday.

Kontaveit, the No. 8 seed from Estonia, needed only 57 minutes to dispatch third-seeded Karolina Pliskova of the Czech Republic. She breezed to a 6-4, 6-0 win to pick up her 12th victory in a row.

Pliskova entered the match with a 3-0 career record against Kontaveit, who finally broke through for the win.

“Of course, very thrilled to be in the semifinals,” Kontaveit said. “I thought I played a very good match. I think it was very important for me to be as consistent as possible. Took some time to get used to her serves. I felt like my game was getting better and better as the match went on. …

“I think it’s just really trusting my shots a little bit more, just going for it, but going for it with margins. I think that’s been very important, not to go for too much, but still stay aggressive and be in charge whenever possible. When it’s not possible, just stay in the rallies, be as consistent as possible.” 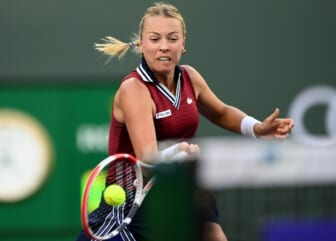 In other action, fifth-seeded Garbine Muguruza of Spain stayed in contention to advance with a 2-6, 6-3, 6-4 win over second-seeded Barbora Krejcikova of the Czech Republic in group-stage action. Muguruza improved to 1-1 in the tourney, while Krejcikova fell to 0-2.

Krejcikova said she was happy with her performance despite the defeat.

“Today, the match was really close,” she said. “I was just the one that was unlucky. That’s it. That’s how I see the match.”

Cristian had advanced all the way to the final after emerging as a lucky loser from qualifying.