Top-seeded Ashleigh Barty punched a ticket to her first Wimbledon final on Thursday by dismissing Angelique Kerber of Germany in straight sets in London.

The Australian recorded eight aces and 38 winners against 16 unforced errors to post a 6-3, 7-6 (3) win over the 2018 Wimbledon champion at the All England Club.

Barty advanced to face the Czech Republic’s Karolina Pliskova, who secured a 5-7, 6-4, 6-4 victory over second-seeded Aryna Sabalenka of Belarus in Thursday’s other semifinal. Barty holds a 5-2 edge in the all-time head-to-head competition versus Pliskova.

“Yeah, it was incredible,” Barty said after her victory in one hour and 26 minutes. “It was just almost a moment of relief, a moment of pure excitement. It was something that I’d never, never knew if I would feel. I think being able to have an opportunity to play in a final here at Wimbledon is incredible.”

Barty, 25, is bidding for her second major title after winning the French Open in 2019. She also is the first woman from Australia to reach the Wimbledon final since seven-time major winner Evonne Goolagong in 1980.

“It’s a really special anniversary for Evonne,” said Barty, who wore an outfit that honored Goolagong. “I couldn’t be more proud to be in a position to wear an outfit inspired by her. Now to kind of give myself a chance to create some history almost in a way that’s a tribute to her is really exciting. I couldn’t be more rapt to have that opportunity on Saturday.” 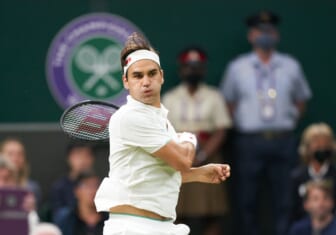 Kerber, 33, was two points shy of gaining the second set before it all unraveled.

“I think any match in a Grand Slam semifinal, it’s going to have to be a very good level,” Kerber said. “It’s no mistake that people keep working their way through the tournament. The latter stages of the tournament, you understand it’s going to be a really tough match regardless of who you’re playing and their experience level.”

Pliskova, the No. 8 seed, is nearly five years removed from her lone major final appearance at the 2016 U.S. Open in New York, where she lost to Kerber.

Pliskova, 20, recorded 14 aces on Thursday to dispatch Sabalenka in one hour, 53 minutes.

“It was just super important to stay in the game, stay focused,” Pliskova said. “That’s what I did.”

Third-seeded Tamara Zidansek of Slovenia and fourth-seeded Danielle Collins required three sets to emerge victorious in their respective second-round matches in the tournament in Germany.

Zidansek posted a 6-3, 3-6, 6-3 victory over Kristyna Pliskova of the Czech Republic, while Collins overcame a first-set misstep in a 1-6, 6-2, 6-3 win over Slovakia’s Kristina Kucova.