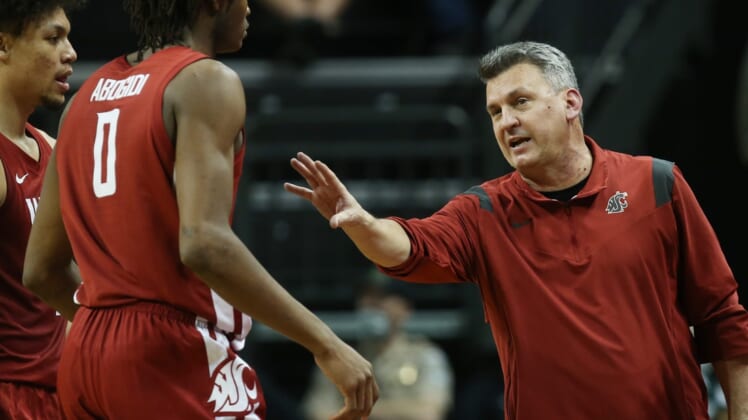 An NIT quarterfinal game between two teams of Cougars — Washington State and BYU — Wednesday night in Provo, Utah, was set up by two significant individual performances in the second round.

A career-high 27 points from Gideon George led BYU to a 90-71 victory over visiting Northern Iowa on Saturday.

Washington State’s Michael Flowers lead the Cougars with 22 points and made all seven of his free throws as WSU went 23 for 26 from the line in a 75-63 win at SMU on Sunday.

While Washington State (21-14) knocked off one of the top seeds in its first NIT appearance in 11 years, BYU has an extensive history in the NIT. The program won the title in 1951 and 1966 and last went to the semifinals in New York in the 2015-16 season.

In the past two games, including a 93-72 victory over Long Beach State in the first round of the NIT, BYU has 50 assists on 72 made field goals.

“The 50 assists in two games is a big deal for us,” said BYU head coach Mark Pope. “Part of it is that the opponents are heavy rotation teams and part of it is that Gideon George stepped on the floor and decided that he was going to make every shot on-balance.”

George also tied his career high in 3-pointers in the win over NIU. He went 10 for 15 from the field, including 5 of 9 from beyond the arc, and grabbed six rebounds.

Te’Jon Lucas contributed 14 points on 7-of-12 shooting and dished out eight assists for BYU.

No. 4 seed Washington State, in addition to the play of Flowers, was buoyed by its dominance on the boards against SMU, topping the Mustangs 46-32, including 18-7 on the offensive glass.

Efe Abogidi had 12 points and eight rebounds, and Dishon Jackson came off the bench to contribute eight points and nine rebounds.