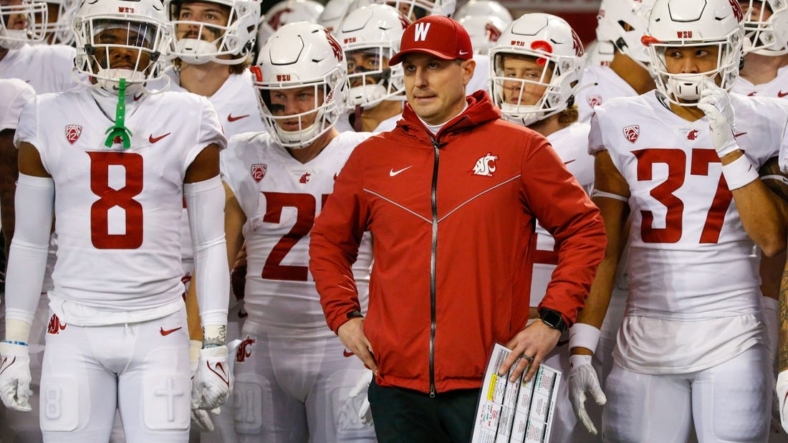 Ward joined the program from Incarnate Word, where he passed for 4,648 yards last season while completing 384 of 590 passes (65.1 percent) with 47 touchdowns and 10 interceptions.

He replaces Jayden de Laura, the Pac-12’s offensive freshman of the year who is now the No. 1 quarterback and a team captain at conference rival Arizona.

“I’m a believer in Cam Ward,” said Dickert, who coached the last six games of 2021 on an interim basis after coach Nick Rolovich was terminated for refusing the COVID-19 vaccine, which had been mandated for university employees.

“Cam has come in and earned the trust of this football team through repetitive action and hard work,” Dickert said. “He’s put in the hard work behind the scenes. I’m excited about what he’s going to do with the weapons that we have on offense.”

Dickert and first-year Idaho coach Jason Eck are longtime colleagues. In 2014 at Division II Minnesota State, Dickert was defensive coordinator and Eck offensive coordinator; and in 2016 both were on the South Dakota State staff.

Eck declined to name a QB1 at his weekly Monday news conference, using the word “or” to underscore his intention, while listing J’Bore Gibbs, CJ Jordan, and Gevani McCoy.

“There has definitely been some interest and suspense at that position, and honestly we’re going to dress four quarterbacks on Saturday,” he said. “We have confidence in all of them if they see the field.”

Whoever is at quarterback, Terez Traynor is the top returning receiver (50 receptions, 737 yards), and former JC transfer Jermaine Jackson showed himself as a versatile player during camp who will also return kicks.

“We want to see guys respond. We’ve got to win the one-on-ones if we get the matchups,” said Eck.

According to USA Today, Idaho receives $575,000 from Washington State for making the seven-mile drive across the state line. Next week, the Vandals will reportedly take in $1.3 million for their trip to Indiana.