Would Los Angeles Rams head coach Sean McVay be on the hot seat if team struggles in 2020? 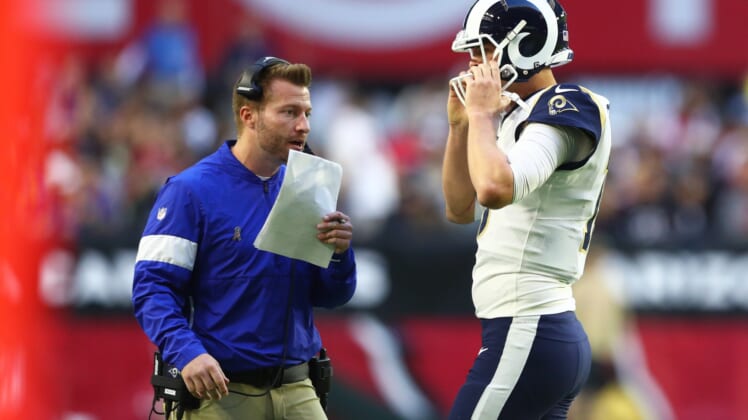 Sean McVay and the Los Angeles Rams had a down season in 2019, finishing in third place within the NFC West with a record of 9-7. The overall record wasn’t awful, but they did miss the playoffs. Coming off a Super Bowl appearance the year before, it was a disappointing slog of a campaign, to be sure.

During last season after the Rams were beaten 17-12 by Mason Rudolph and the Pittsburgh Steelers, coming off a bye no less, Frank Schwab of Yahoo Sports hinted McVay’s seat could be warming up.

“We spent a lot of time the past two seasons praising McVay,” Schwab wrote. “He was seen as something between a genius and the man who was reinventing offensive football. It’s only fair to give him some much-deserved blame when the Rams are sitting at 5-4 and in real danger of missing the playoffs.”

He also wrote that “We might find out a lot about McVay” the rest of the season. Well, the Rams went on to win four of their final seven games and missed the playoffs.

One of the big things that hurt the Rams last season was the poor play of Jared Goff. He took a significant step back in his development. Some have suggested that his frustrating season had to do with teams figuring out McVay’s system. Regardless of whether that is true or not, nobody can deny McVay and Goff are joined at the hip here.

Is Sean McVay on the hot seat in 2020 if the Rams struggle?

The question of whether McVay would be on the hot seat this season came up to Albert Breer of The MMQB. He pointed to the roster as the biggest reason the Rams struggled.

“Todd Gurley broke down. Brandin Cooks’s concussion situation worsened. The offensive line crumbled after losing John Sullivan and Rodger Saffold. The defense underwent some pretty significant transition in the secondary. And, again, the team was still on the doorstep of the postseason.”

Breer did say the Rams have “a lot of work to do,” specifically citing the offensive line and Goff. Speaking of the quarterback, he may be more on the hot seat than McVay is.

But to the original point, Breer concluded by writing, “the idea that McVay would be on the hot seat is crazy talk. The Rams would be insane to let him go, which is why that’s not even a thought out there.”

So apparently McVay is absolutely, 100% not on the hot seat.

We’ll put a pin in this and revisit the topic next January.