Worst of the XFL in Week 5 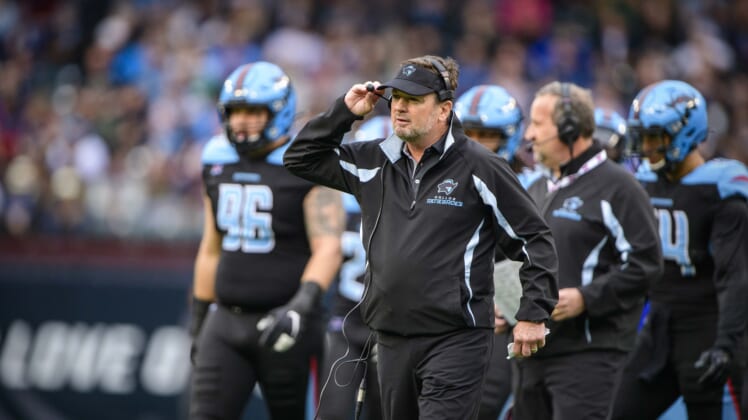 With each passing week, the XFL seems to lose some of its luster, and that trend continued in Week 5.

Quarterback play, poor coaching, and a big mistake by the league itself were on display. Despite some really fun ideas that the league has implemented, at this point we’re not too hopeful things are going to change.

Here, we dive into the worst of the XFL from Week 5.

Some games are just boring

It says something that the most exciting thing that happened during Sunday’s first game happened in the stands.

We highlighted the distinct lack of scoring around the XFL last weekend, and while some of the teams were able to put points on the board in Week 5, others seemingly could barely move the ball, let alone score touchdowns.

This league was hyped as a more entertaining alternative to the NFL. It features some interesting rules that were designed to make this league more fun to watch. So far, the wow factor is extremely tepid, and what we’re seeing is a sloppy product that isn’t all that different than watching two bad NFL teams slug it out for 60 minutes.

Bob Stoops having a square peg, round hole problem

The Dallas Renegades have a couple of bad quarterbacks in Landry Jones and Philip Nelson. The two of them combined, through five games, have thrown five touchdowns and an astonishing 10 interceptions. That’s bad, folks. Really, really bad.

So, it’s just baffling that head coach Bob Stoops continues to throw the ball so darn much. On Saturday, Nelson, starting because Jones is out with a knee injury, threw the ball a whopping 49 times. He completed 28 of those attempts for a measly 210 yards with no touchdowns and two interceptions.

The Seattle Dragons would be one of the better teams in the XFL if only they could find a spark offensively. A team that boasts a strong defense and enthusiastic fan base, Seattle just cannot seem to get anything going on the offensive side of the ball.

That seemed to be a non-issue early on Saturday as the Dragons took on the Houston Roughnecks. They silenced the crowd in Houston early by going up 14-0, and quarterback B.J. Daniels appeared to have something going in the first quarter. Then, things fell apart in a hurry. All told, the Dragons managed just 201 yards of total offense and averaged a stunning 2.3 yards per play. That kind of pathetic production isn’t going to get it done at any level.

Despite the above-mentioned offensive issues Seattle was having Saturday against Houston, the Dragons actually had a chance to tie the game up late in the fourth quarter. Or, rather, they should have had that chance. Instead, they were denied the opportunity to score a touchdown and three-point conversion with two seconds left at Houston’s 23-yard line because the XFL botched the ending of their game in a big way.

Roughnecks quarterback P.J. Walker took a knee on fourth down with two seconds left. That should have given Seattle one last chance, down by nine, to tie the game. Instead, the refs ran off the field, and the league did not bring them back on to finish the game. Since then, the XFL has admitted to its mistake, which is commendable. But this was a bad look to begin and marred what’s already a product people are beginning to tune out of.