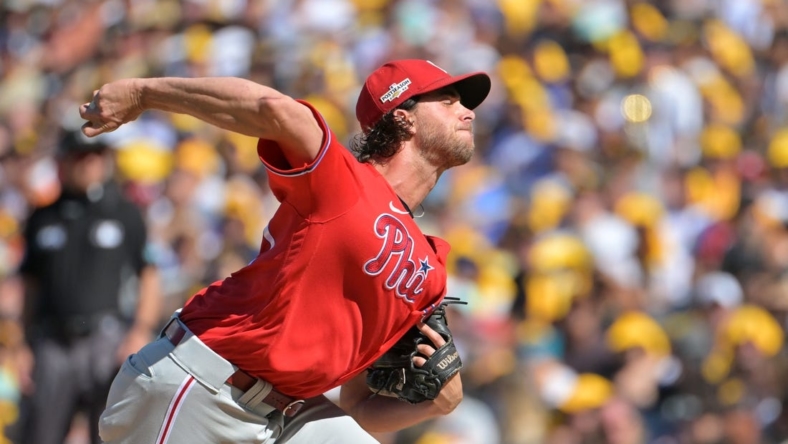 The 39-year-old right-hander’s career Fall Classic record is 0-6 with a 5.68 ERA in seven career starts with two franchises.

“My goal is to go out and give us the best chance to win,” he said. “If that ends up resulting in a win, great. I’ve been a part of games that I pitched and started that we won in the World Series, which is more important than getting the win.”

Verlander will go up against Phillies right-hander Aaron Nola, who is 2-1 with a 3.12 ERA this postseason and beat the Astros on Oct. 3 to help Philadelphia clinch its postseason spot.

“Obviously, it’s a different stage of the last time we played here,” Nola said. “It’s a good team that we’re playing against, and we are too, so I think we’ll see (Friday) and we’ll see this series.”

First pitch is scheduled for 8:03 p.m. ET at Minute Maid Park in Houston.

PROP PICKS
Astros RHP Justin Verlander over 5.5 strikeouts (-160 at BetMGM): This has been the most popular player prop at the sportsbook. Verlander has had his World Series struggles and was knocked around by Seattle in his first playoff outing this year. But he rebounded with 6.0 strong innings against the Yankees. New York, like Philadelphia, is a power-hitting team, and Verlander fanned 11 Yankees in his most recent outing.

Phillies OF Bryce Harper Over 0.5 Home Runs (+330 at DraftKings): Harper sent the Phillies to the World Series with a dramatic home run in Game 5 against San Diego. He enters the World Series riding a 10-game postseason hitting streak, tying Lenny Dykstra’s franchise record set in 1993. Harper hitting a home run is the most-bet player prop at DraftKings, and Verlander has surrendered a homer in each of his two playoff starts this year.

Under 6.5 Total Runs (+105 at BetMGM): Both sportsbooks are offering the same Over/Under for this prop, with 54 percent of the bets backing the Over at BetMGM while 58 percent of the money is behind the Under. Houston has allowed only 15 earned runs in 72 innings through seven postseason games. Meanwhile, Nola struck out nine while allowing only two hits through 6 2/3 innings in that Oct. 3 meeting against the Astros.

PREDICTION
The Astros enter the World Series as strong favorites, owning home-field advantage while posting a 7-0 record this postseason. However, the Phillies can flip the script by winning one of the first two games in Houston. Verlander is coming off a strong outing against the Yankees, but his dismal World Series record can’t be dismissed until he proves otherwise on the biggest stage. — Phillies 3, Astros 2