Martin Trainer, ranked No. 1,310 in the world, stood at 10 under par and held a one-stroke lead at the Hewlett Packard Enterprise Houston Open when play was suspended due to darkness Friday.

Trainer finished off a 5-under 65 for his first round, then posted the same score for round two. He leads Kevin Tway (67-64) by one shot.

Trainer went without a bogey in his second round, though he said Memorial Park Golf Course has been challenging.

“Inevitably you’re going to have 5-, 10-footers for par, and that happened to me on several occasions today, and I was able to make them, but we’ll see in the long run, hopefully I can keep that up,” Trainer said.

Trainer has one career victory on tour but had been slumping. He made just six cuts in 49 combined starts the past two seasons and opened this season with five missed cuts in a row.

“It is demoralizing when you keep missing cuts over and over again,” Trainer said. “On Tour obviously it’s tough to even compete and make a cut, let alone, you know, get to the top of the leaderboard. 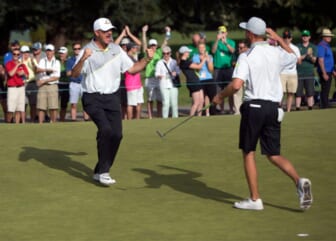 “It’s been tough at times for me the last couple years not playing well, but now that I figured out a little bit of ball-striking, dropped some putts, it really can turn around that quickly. So I’m just grateful that that’s happening to me this week and hopefully I’ll keep it going.”

Scottie Scheffler set a course record with an 8-under 62, featuring nine birdies against a lone bogey. His highlights included a birdie putt of almost 25 feet at No. 6 and a chip-in birdie from off the green at the par-3 11th, though his iron play helped him set up six made birdie putts from inside 8 feet.

His round pushed him to 6 under for the tournament, good for a tie for fifth.

“Yesterday I was playing out of the rough most of the time, so it was just nice getting the ball out there in play, give myself some opportunities,” Scheffler said. “This golf course can be pretty challenging from the bermuda (grass) rough, and you’ve got to hit the ball in play.”

Jason Kokrak made six birdies through his first 10 holes and finished No. 11 before play was suspended. He stood at 8 under, alone in third.

Adam Long fired a bogey-free 67 Friday to move to 7 under and sole possession of fourth. Kramer Hickok (67) and Adam Schenk (64) are tied with Scheffler for fifth.

After an opening-round 70, Lee Westwood of England was 12 over through 16 holes when the horn sounded. He was done in by a triple-bogey at the par-5 eighth and a double-bogey on the par-3 ninth.