World No. 1 Jon Rahm confirmed Sunday that he won’t play in the season-ending DP World Tour Championship next week, giving up the chance to win the European Tour 2021 points title.

He’s decided to extend the four-week leave from golf he announced on Oct. 18, when he said he needed time off to mentally rejuvenate. As a result, he won’t travel to Dubai for the tournament.

In Dubai, Rahm would have had a chance to win his second European points title — what is known as the Race to Dubai — in three years.

“After lengthy discussions with my team, I have come to the difficult decision not to travel to Dubai next week,” Rahm said in a statement. “The demands of a long season with many ups and downs has taken a lot out of me. I feel I need to take time to recharge my batteries while spending quality time with my family.” 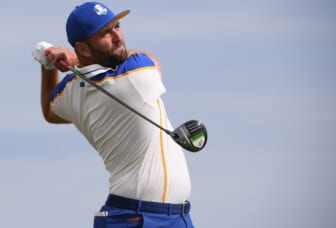 It’s been a whirlwind year for Rahm, who became a father in April, was forced to withdraw from the Memorial Tournament in June while leading by six strokes because of a positive COVID-19 test, won his first major championship (U.S. Open) in June, couldn’t compete in the Tokyo Olympics in August due to another positive test, then finished 3-1-1 at the Ryder Cup in September.

Rahm, 27, was Europe’s best chance to claim the title. Rahm is third in the Race to Dubai standings behind Collin Morikawa and Billy Horschel with Tyrrell Hatton of England a distant fourth.

An American has never won the points title since the competition launched in 1972 but appears poised to do so this year. Englishman Lee Westwood won last year.

The European Tour announced last week that it will become the DP World Tour beginning next season, with the revamped tour featuring more than $200 million in prize money for the first time.

“I would like to take this opportunity to wish DP World and the European Tour all the best for the season-ending event, which is always such a special tournament,” Rahm continued. “I would also like to reiterate my congratulations to both for the announcement of the DP World Tour earlier this week, and I look forward very much to competing on the DP World Tour next year.”