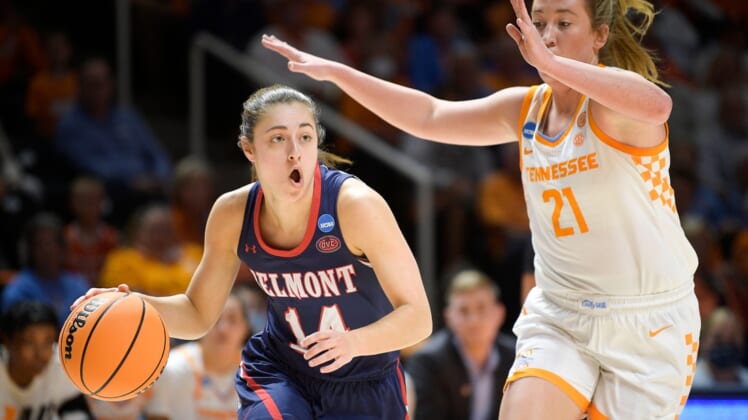 Fourth-seeded Tennessee survived a major scare from in-state foe Belmont, pulling out a 70-67 win on Monday to advance to the Sweet 16 of the women’s NCAA Tournament for the first time since 2016.

Belmont, the 12th seed, had a lead inside the final minute, but Tennessee’s Sara Puckett knocked down a 3-pointer to give the Volunteers a 67-66 lead with 20 seconds remaining.

Tamari Key made 3 of 4 free throws in the final seconds to seal the win for the Volunteers (25-8) in the second-round Wichita Region game. Alexus Dye scored 20 points to lead Tennessee, while Key had 18 and Puckett added 12. The Lady Volunteers will face to-seeded Louisville in the Sweet 16.

Destinee Wells had a game-high 22 points for the Bruins (23-8) while Tuti Jones had 17 and Madison Bartley scored 16.

The Wolverines (24-6) punched their ticket to the Sweet 16 with a comfortable home win over the Wildcats, finishing off a perfect 16-0 record at Ann Arbor, Mich., on the season. Michigan used a huge effort on the offensive glass to power past Villanova (24-9), grabbing 31 offensive rebounds as part of a 49-25 total advantage in rebounding. Naz Hilmon led Michigan with 27 points and 11 rebounds, while Maddy Siegrist topped Villanova with 12 points. Next up for Michigan is 10th-seeded South Dakota.

Despite leading scorer Elissa Cunane being limited to 13 minutes due to foul trouble, a supporting cast led by Kayla Jones, Raina Perez and Diamond Johnson powered the Wolfpack (31-3) into the Sweet 16 for the fourth consecutive tournament. Jones scored 18 points on 8-of-9 shooting while Perez and Johnson had 15 points apiece as NC State set up a Sweet 16 matchup with fifth-seeded Notre Dame. Serena Sundell led Kansas State (20-13) in scoring with 17 points.

Grace Berger scored the last three of her game-high 15 points in the final minute to rescue the Hoosiers (24-8) after a 14-point lead turned into a one-point deficit. Following a Princeton turnover, Indiana’s Aleksa Gulbe made two foul shots with 1.6 seconds left before the Tigers’ Abby Meyers hit a 3-pointer at the buzzer. Princeton (25-5) held the Hoosiers to 12 points for the first 19 minutes of the second half. Indiana led by 14 points with about six minutes to play in the third quarter.

Dara Mabrey put up a season-high 29 points, one of three Notre Dame players with at least 20 points, as the Fighting Irish (24-8) advanced to the Sweet 16. Sonia Citron scored 25 points and Maya Dodson had 20 points for Notre Dame, which closed the first quarter on a 30-5 run and never looked back. Oklahoma (25-9) got 19 points from Taylor Robertson.

Jacy Sheldon scored 23 points and the Buckeyes limited LSU to eight first-quarter points and 11 points in the third quarter en route to the upset win in Baton Rouge, La. Ohio State (25-6) built a 24-point lead prior to the final quarter before holding on to advance to a matchup with second-seeded Texas. Taylor Mikesell (18 points) hit four of Ohio State’s 10 baskets from 3-point range, while the Tigers made only two treys. Khayla Pointer’s 32 points weren’t enough to rescue LSU (26-6), which ended its first season under three-time national champion coach Kim Mulkey.