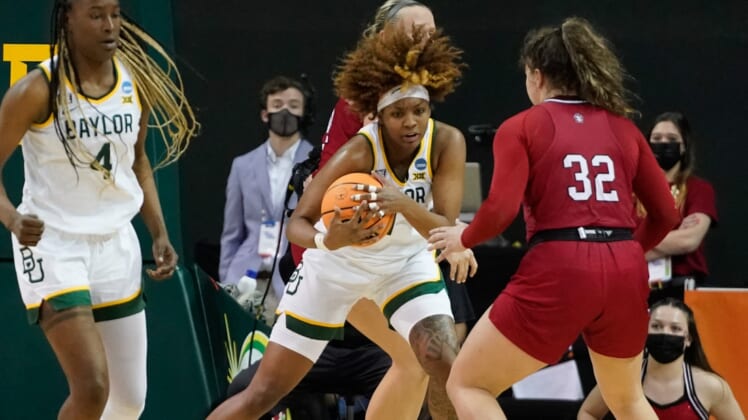 South Dakota is in the Sweet 16 for the first time in program history after its 61-47 upset Sunday of No. 2-seeded Baylor at Waco, Texas, largely because of its defense, particularly against two-time All-American forward NaLyssa Smith.

Smith, the projected No. 1 pick in the upcoming WNBA draft, was limited to 10 points on 4-of-11 shooting from the field. She averaged 22.1 points this season.

“I just think our goal with NaLyssa was to make it difficult for her to get scoring opportunities,” South Dakota coach Dawn Plitzuweit said. “But that takes a lot of energy and we couldn’t do it by fronting her, so we would have to find ways from different spots on the floor during the course of the game.”

Hannah Sjerven outdueled Smith with 16 points before fouling out.

She was one of the defenders on Smith who “played fearless,” according to Plitzuweit.

Sjerven, a Super Senior with an extra year of eligibility due to the pandemic-induced 2020 Tournament cancellation, said the key to slowing down Smith was “not letting her go one-on-one.”

“When she goes one-on-one, she’s probably going to score and it’s hard to defend her,” Sjerven said. “When we can help each other to guard her, it’s a lot easier.”

Stanford senior Lexie Hull is returning home with her twin sister Lacie to Spokane, Wash., for the Sweet 16 after leading the Cardinal with a career-high 36 points in a 91-65 win Sunday over Kansas at Palo Alto, Calif.

Lexie Hull made 14 of 21 shots from the field, including 6 of 11 from 3-point range. She also had six rebounds and three assists.

The Hulls are products of Central Valley High School in Spokane. Lexie Hull told ESPN after the win over Kansas that their family is planning on hosting the Cardinal at their home during the trip there this week.

“The family is getting everything ready,” Hull said. “Hopefully we can have a little get-together, but we’ll see. It should be a lot fun. I know a lot of people in Spokane are excited to have us coming home.”

Iowa State coach Bill Fennelly, in his 27th season as Iowa State’s head coach, went through an 11-year drought of advancing to the Sweet 16 until Sunday’s 67-44 win over Georgia in a second-round game at Ames, Iowa.

It his sixth trip that far in his career with the Cyclones. He has reached the Elite Eight twice, the last time in the 2008-09 season.

“I don’t know that I’ve ever wanted something professionally more in my life,” Fennelly said of the Sweet 16 trip.

“Sometimes in life you earn things and you get it. Well, this group earned it and they got it and pretty damn sweet along the way.”

Fennelly had a different motivational approach before his team faced Georgia.

Previously this season, he posted signs for the players to see to get them going.

“To be quite honest with you, we completely stayed away from that,” Fennelly said. “When we played Missouri State (in the first round), I had e-mails and text messages from former players that that was not a good idea.

“All I did tonight was I said to them before the game you earned the right to be here, you’re a very, very special team, this is your last chance at Hilton (Arena), enjoy every second of this and let’s just go play.”