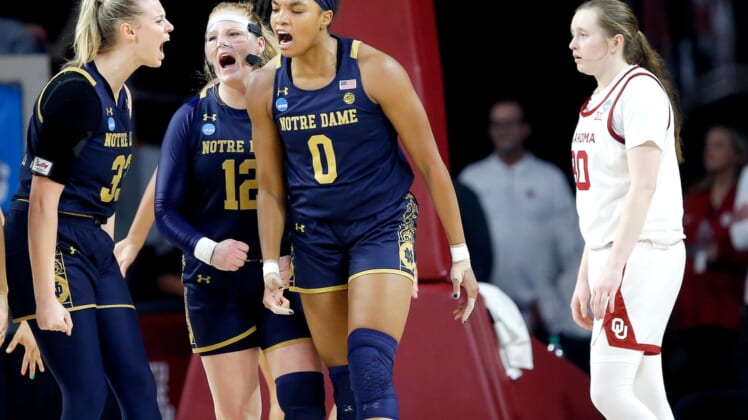 With three players scoring at least 20 points during a second-round women’s NCAA Tournament game, fifth-seeded Notre Dame made history in a 108-64 destruction of Oklahoma on Monday in Norman, Okla.

The margin of victory was the largest in NCAA Tournament history by a lower-seeded team. The Sooners also took the worst NCAA tourney loss in program history.

“To be honest, when you shoot like that — I felt like I was unconscious there — at one point I wasn’t thinking,” said Notre Dame guard Dara Mabrey, who hit seven 3-pointers and scored 29 points. “I just knew when I caught it, I was going to let it go and it was going in. As a shooter when you believe in yourself like that, you believe I’m going to make it and it’s going in, chances are it’s going to go in.”

“This is something you wish for, you pray for,” Notre Dame coach Niele Ivey said. “We haven’t had a game yet where we were really good on both sides of the ball. Like the entire game as far as running and our offense was exactly how I envisioned it as far as our pace, and we shot the ball well. We did a great job of shot selection, going inside out.”

Notre Dame will take on top-seeded North Carolina State in the Sweet 16 on Saturday in Bridgeport, Conn.

–Thanks to a 64-49 victory over Villanova, the Michigan women’s basketball program made history by advancing to the Sweet 16 in back-to-back seasons for the first time in school history.

Prior to last season, the Wolverines had never even made it out of the first weekend, but now Michigan has done it again.

“Everybody doesn’t get to the Sweet 16,” said Michigan senior Naz Hillmon, who put up game highs of 27 points and 11 rebounds. “You never know when it’s going to happen again, so we need to celebrate for our time.”

Last season, Michigan lost a 78-75 overtime heartbreaker to Baylor in the Sweet 16. The Wolverines would have had an opportunity for revenge against the Bears in the Wichita Regional, but 10th-seeded South Dakota pulled a shocking upset over second-seeded Baylor on Sunday to advance instead.

If third-seeded Michigan can defeat South Dakota on Saturday, it would mark the program’s first-ever trip to the Elite Eight.

“I don’t want it to end,” Michigan coach Kim Barnes Arico said. “And I try to embrace every single practice and every single moment with them. So I know we’ll be back at it (Tuesday) and excited for what’s ahead of us.”

–Indiana is back in the Sweet 16 for the second consecutive season despite producing its lowest point total in a home game this season during a 56-55 victory against Princeton in Bloomington, Ind.

The third-seeded Hoosiers banked on their recent background to come through after a 14-point lead vanished and they trailed in the final minute.

A year ago, the Hoosiers reached the Elite Eight, the best women’s NCAA Tournament result in school history, but most of the season was played without fans. This time, they relished in the environment.

“I’m going to go high-five (the fans) and make them feel like they’re part of this victory because they are,” Holmes said. “We couldn’t have done this without them, and I want them to keep showing up for us.”

Indiana had to overcome 17 turnovers to move on to a Saturday matchup with second-seeded UConn in Bridgeport, Conn.

“It was hard to find some offense,” coach Teri Moren said. “Our kids just had enough.”