Women’s group calls for the NFL to fire Roger Goodell 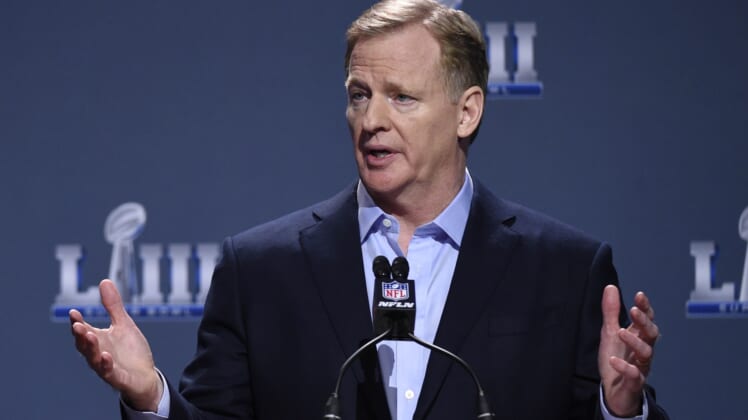 As the NFL prepares for Super Bowl LIII this coming Sunday, Commissioner Roger Goodell gave his State of the Union address Wednesday in Atlanta.

Hunt was released by the Chiefs this past regular season after a video was released depicting him hitting and kicking a woman. It’s not yet known what type of punishment Hunt will face from the NFL. But it’s just the continuation of a major domestic violence issue around the league.

In the lead up to Goodell’s press conference, a women’s rights group by the name of UltraViolet released a statement calling for the commissioner to be fired.

“The NFL needs leadership that will use the it’s unmatched influence on our culture to set an example by holding perpetrators of gender-based violence accountable and combating racism.” Shaunna Thomas, co-founder of UltraViolet, wrote in a statement obtained by Sportsnaut. “Under Roger Goodell, the State of the NFL is poor, and that’s why, Goodell Must Go.”

“In 2014 after Ray Rice viciously assaulted his then-fiancee, Janay Palmer, Goodell purposely delayed taking any action to investigate—perpetuating society’s acceptance of violence against women in front of a nationwide audience when he suspended Rice for a mere two games,” she said. “Failing to do any better despite the NFL’s tainted reputation, Goodell also waited to take action until video evidence surfaced of violent incidents by Reuben Foster, formerly with San Francisco, and Kareem Hunt, formerly with Kansas City.”

Unfortunately for those hoping for a change of leadership in the NFL, Goodell just recently signed a lucrative $200 million extension that will take him through the 2024 season.

The frustration we’ve seen from the likes of Thomas and her group is understandable. From the entire Ray Rice debacle to what we’ve seen recently with Reuben Foster and Kareem Hunt, the NFL simply needs to do better in this regard. There’s no other way to go about it.