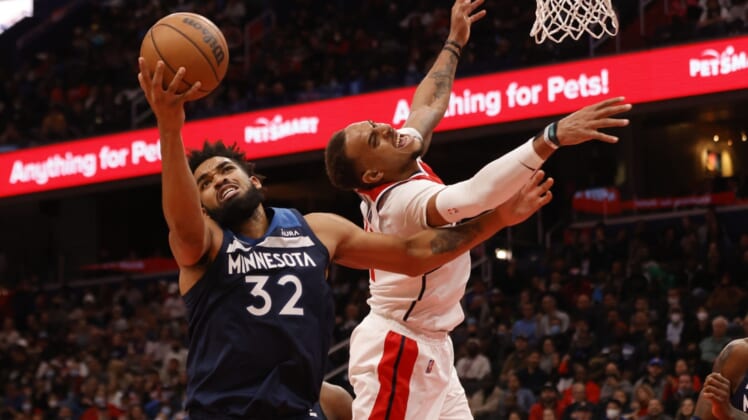 The Timberwolves begin the final stretch on Tuesday against the visiting Washington Wizards (34-44), who are coming off a 42-point loss to the Boston Celtics on Sunday.

Minnesota (45-34) is in seventh place in the Western Conference and sits 1.5 games behind the sixth-place Utah Jazz in the battle for a top-six playoff berth.

The Wolves won their second straight game on Sunday with a 139-132 victory over the Houston Rockets. Anthony Edwards scored 33 points and Towns added 28 for Minnesota, which led by as many as 27 in the fourth quarter.

As the Wolves prepare for their final three home games, Towns is focused on just one thing.

“Wins. That’s it,” he said. “That’s all we need is wins, no matter how it comes. How ugly, how nice, how cute or how bad. Just get a win and put ourselves in a position where we can be happy that we threw all our punches in the regular season and step into the postseason in a good headspace.”

Minnesota has lost its last four meetings against Washington, including a 115-107 defeat on Dec. 1.

The Wizards improved to 14-8 with that victory but lost seven of their next eight games. Washington later reshuffled its roster at the trade deadline and was eliminated from playoff contention last week.

The team suffered its biggest loss of the season on Sunday, when Boston shot 61.5 percent from the field and 52.3 percent from 3-point range in a 144-102 romp.

Kristaps Porzingis and Kentavious Caldwell-Pope scored 17 points apiece for Washington, which allowed 70 points in the first half and 74 in the second.

“We didn’t come in with the same mind-set, and we weren’t ready to play. We’re not going to let it linger; we have to learn from it and obviously be better,” Wizards coach Wes Unseld Jr. said. “But you have a handful of games left — we’re not letting go of the rope and saying, ‘All right, well, so be it.’ We still want to make sure we’re getting something out of these last few games.”

Third-year pro Rui Hachimura has moved into the starting lineup in place of Wizards forward Kyle Kuzma, who is expected to miss his 10th straight game with right knee tendinitis.

Hachimura averaged 19.7 points in three games before recording his only scoreless game of the season on Sunday.

The Wizards will look to bounce back against a Minnesota team that is 25-13 at home this season.

Wolves guard Patrick Beverley sat out Sunday’s contest against Houston with a sprained right ankle and is listed as day-to-day.

Minnesota is also hoping to have Jaden McDaniels back in the lineup soon. The 6-foot-9 forward has been out since March 14 with a high left ankle sprain but has been participating in light scrimmages.

“We certainly miss him,” Wolves coach Chris Finch said. “We miss his defensive presence and we miss his cutting and he finds a way to get baskets just in the flow of the game. That’s huge for us.”

After facing the Wizards, Minnesota closes the regular season with home games against the San Antonio Spurs and Chicago Bulls.