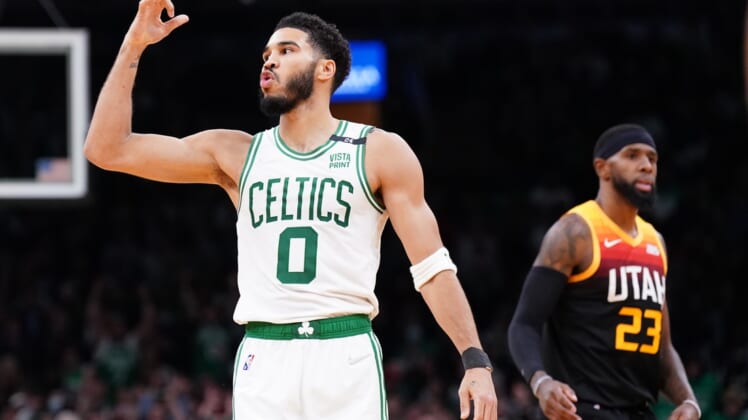 The Boston Celtics will bid to continue their meteoric rise up the Eastern Conference standings on Sunday when they host the Minnesota Timberwolves.

The Celtics (46-28) resided one game under .500 following a 109-105 setback to the Portland Trail Blazers on Jan. 21 before igniting a scintillating 23-4 run. Boston finds itself in a four-team logjam near the top of conference after recording its fifth straight win, a 125-97 romp over the Utah Jazz on Wednesday.

“It’s fun coming into work every day,” said Jaylen Brown, who is averaging 27.4 points during the win streak. “It’s fun talking, building with your teammates. We’ve just gotta continue to get better, and that’s it, man. That’s all we can ask for; just come out, give a great effort, play together, and see what happens from there.”

Jayson Tatum, who is averaging a robust 33.6 points per game in March, matched Brown with 26 versus the Jazz. Tatum, in fact, has scored at least 20 points in 18 straight games dating back to a 19-point performance in Boston’s 126-91 win over the Brooklyn Nets on Feb. 8.

Marcus Smart chipped in a career-high 13 assists on Wednesday as the Celtics kept up the intensity after taking a 15-point lead at the end of the first quarter.

“A big sign of growth is that everybody is on the same page,” Boston coach Ime Udoka said. “It’s become contagious and it’s trickling down. We love the energy overall.”

Brown had 26 points in the Celtics’ 108-103 loss to the Timberwolves on Dec. 27 in Minneapolis. That setback was troublesome considering Minnesota was without all five of its regular starters due to COVID-19 protocol — including top three scorers Karl-Anthony Towns, Anthony Edwards and D’Angelo Russell.

Towns fared just fine on Friday, collecting 20 points and nine rebounds to lead the Timberwolves (43-32) to a 116-95 victory over the visiting Dallas Mavericks.

The victory snapped a modest two-game skid for Minnesota, which has won five of its past seven road contests entering the opener of its four-game road trip on Sunday.

“You’ve got to be able to respond to adversity quick,” Towns said, “especially if we’re going to be in the playoffs and we’re talking about winning a championship.”

The Timberwolves saw seven players score in double digits, with six of that group pulling down at least five rebounds.

“It shows how good our team is,” said Jordan McLaughlin, who scored a season-high 16 points on Friday. “One through 15 on this team can play in a rotation. It can be anybody’s night on any given night.”

Malik Beasley’s health is in question after he sprained his ankle in the second quarter of Friday’s game.

“Hopefully it’s not too bad,” Timberwolves coach Chris Finch said of the injury to Beasley. “I know everyone’s banged up, but there’s so much on the line for us. I think it’s indicative of not how bad we want it, but how bad they don’t want to let their teammates down.”