Wolves favored at home to force Game 7 vs. Grizzlies 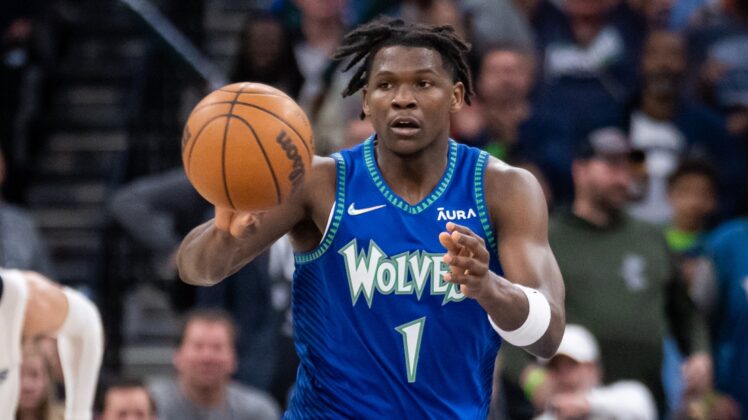 Every superhero needs a foil, with the Memphis Grizzlies’ high-flying Ja Morant ready to end the current drama of a first-round playoff series against the Minnesota Timberwolves and Karl-Anthony Towns.

Morant’s already lofty star has continued to rise in the Western Conference series, with the second-seeded Grizzlies leading 3-2 and poised to advance Friday in Game 6 at Minneapolis. But the Timberwolves are a victory away from creating what would be a blockbuster Game 7.

Minnesota opened as a 1.5-point Game 6 underdog at BetMGM but the line has since shifted to the Wolves -1.5. Memphis has been backed by 70 percent of the spread bets and 68 percent of the handle at the sportsbook.

The seventh-seeded Wolves upset the Grizzlies in Game 1 and they seemed headed toward a 2-1 edge when they led by as many as 26 points in Game 3. But the Grizzlies pulled off a 104-95 victory.

That could have been a deflating defeat for the Wolves, but Minnesota rebounded for a 119-118 victory in Game 4.

Minnesota went into Memphis on Tuesday and led by double digits late in the third quarter before Morant pulled off the high-flying dunk that has been a signature moment of these playoffs. Memphis was then able to gain momentum and scratch out a 111-109 victory to go on the brink of advancing.

“This is the fun part about playoff basketball,” Grizzlies coach Taylor Jenkins said. “You don’t know how you’re going to win. You’ve just got to keep chipping away, keep trusting it.”

Memphis won Game 5 because of Morant, who had been named the NBA’s Most Improved Player a day earlier. He had 30 points, 13 rebounds and nine assists to help the Grizzlies, who were trailing by double digits with less than seven minutes remaining.

After he was done soaring through the lane to end the third quarter Tuesday, Morant scored 18 points in the fourth quarter, including the Grizzlies’ final 13.

“Obviously, (Morant) had a brilliant fourth quarter,” Jenkins said of his star, who has averaged 22.4 points with 10.4 assists and 8.8 rebounds in the series.

Said Memphis’ Jaren Jackson Jr., who scored 12 points: “It’s been there all year, the fight, just resiliency to come back.”

After a timeout following Anthony Edwards’ 3-pointer that pulled the Wolves even at 109 with 3.7 seconds left, Morant took an inbounds pass and drove to the basket for a winning layup with one second left.

Towns led Minnesota with 28 points and 12 rebounds, but his desperation shot at the buzzer was off the mark. The defeat left the Wolves facing elimination.

“It’s a tough pill to swallow,” said Towns, who has averaged 22.6 points with 11.0 rebounds in the series. “We hit a big 3 to tie the game up with 4 seconds (left). You feel good about going into overtime and having a chance to win the game. (It’s) just a learning experience.

“They don’t beat themselves,” Finch said of the Grizzlies. “They make little plays when it matters most.”

If the Wolves can continue the series trend of alternating wins, Game 7 will be Sunday in Memphis.

“Everybody knows that we’re facing an elimination game on Friday, so I don’t think anybody is down,” said Edwards, who matched Towns’ 28 points in Game 5. “I think everybody is just disappointed we lost (Tuesday). But I’m looking forward to Friday because all the pressure is on.

“It’s time to show up. I’m thinking everybody is ready. It’s going to be a whole new game. Hopefully we can get a lead and keep it.”

The Over/Under market opened at 229.5 at BetMGM but also has seen movement. It was at 228.5 on Friday with 67 percent of the bets and 56 percent of the handle backing the Under.