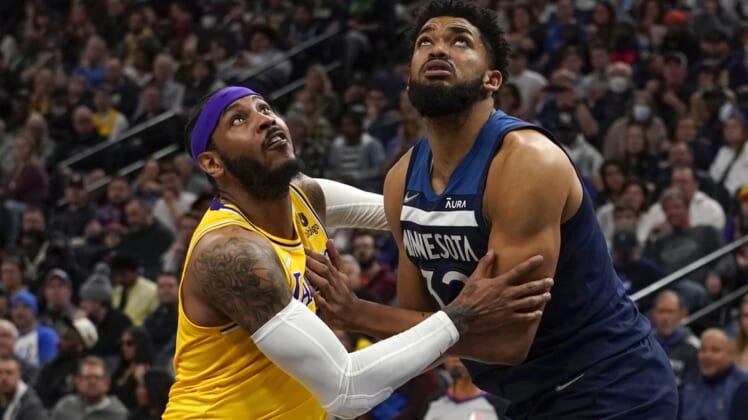 Karl-Anthony Towns scored 30 points and Anthony Edwards added 27 as the Minnesota Timberwolves never trailed in a 124-104 win over the Los Angeles Lakers on Wednesday in Minneapolis.

Patrick Beverley contributed 18 points while Taurean Prince added 13 and Jaylen Nowell had 10 for Minnesota, which led by as many as 25 in the second quarter. The Wolves have won three straight and nine of their past 10.

LeBron James paced Los Angeles with 19 points while Carmelo Anthony scored 16 and Russell Westbrook added 15. The Lakers have lost 12 of their past 15 games, and they have dropped each of their past 11 road contests.

Los Angeles outscored the Wolves 31-19 in the third quarter and pulled within 86-77 when D.J. Augustin closed the period with a 3-pointer at the buzzer.

Augustin scored with 10:12 remaining left to cut the gap to 89-85 before Minnesota answered with a 25-9 run to squelch the Lakers’ comeback attempt.

The Lakers trailed by at least 14 points after the first quarter for the third straight game, falling behind 31-17 after shooting 28.6 percent from the field and missing all 10 3-point attempts.

Minnesota stretched its lead to 51-26 after opening the second quarter on a 20-9 run, and the hosts held a 67-46 advantage at the break.

Edwards scored 24 points in the first half for the Wolves, who have held a double-digit lead in 10 straight games.

One game after scoring a franchise-record 60 points in a 149-139 win over the San Antonio Spurs on Monday, Towns was limited to 12 points in the first half while battling foul trouble.

Towns picked up his fourth foul early in the third quarter and Los Angeles scored 10 straight points to cut the deficit to 69-56 with 8:34 left.

Edwards wound up with six 3-pointers and six rebounds for Minnesota, which won the season series against the Lakers 3-1.

Lakers guard Talen Horton-Tucker exited the game in the second quarter after aggravating his left ankle injury. He did not return.