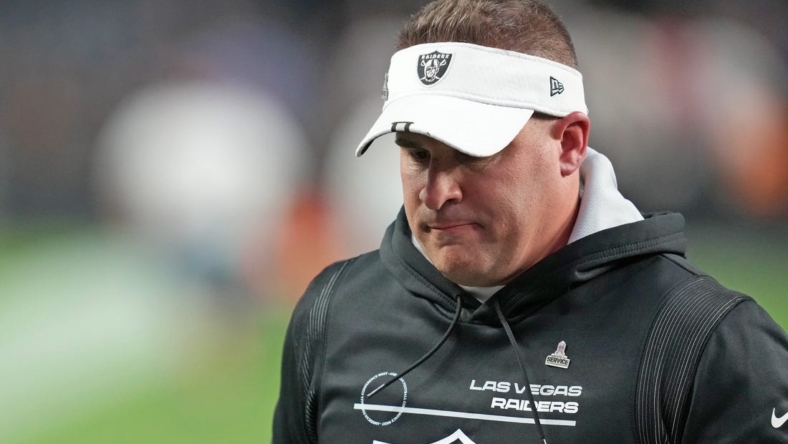 Raiders Week in Denver arrived with little fanfare as the AFC West rivals prepare to face off with a combined record of 5-13 in 2022.

Las Vegas comes to town as the conversation stirs around both franchises is fixed more on survival than superiority.

The ones trying to survive might be the head coaches.

The Broncos (3-6) and Raiders (2-7) meet in Denver on Sunday with playoff hopes all but extinguished.

Josh McDaniels took over a Las Vegas team that made the playoffs under an interim coach last season but has suffered some bad losses to publicly put his job in jeopardy.

The drumbeat for McDaniels, who coached the Broncos in 2009-10 for 28 games before being fired, got louder when his Raiders lost to Indianapolis — at home — last week. The Colts played their first game under interim Jeff Saturday, who had never been a coach of any kind beyond high school.

Las Vegas owner Mark Davis has given McDaniels a vote of confidence.

“People in today’s world want instant gratification. The guy’s coached nine games. We’re 2-7, not the results we’re looking for but at the same time we’ve lost six one-score games with the ball and a chance to win at the end,” Davis told ESPN.

One of the Raiders’ wins was over Denver on Oct. 2, a 32-23 victory that was the high-water mark for the Broncos’ offense this season. Denver is averaging an NFL-worst 14.6 points, which has wasted a defense that holds opponents to the fewest per game (16.6).

The Broncos acquired Russell Wilson from Seattle in the offseason to solve their quarterback quandary. But the offense has produced just 12 touchdowns in nine games.

While Denver sinks, Wilson and head coach Nathaniel Hackett, in his first year as a head coach, are having trouble getting in sync.

“We’re close, but that’s not what we’re here for,” Hackett said. “We’re not here to be No. 1 in close games. We’re here to win football games. … We’ve got to get this stuff fixed.”

That task was made more difficult with injuries to the offense. KJ Hamler (hamstring) and Jerry Jeudy (ankle) are hurt, with Hamler expected to miss a few weeks, further depleting the wide receiver corps.

The offensive line has been hit hard by injuries, too. Center Lloyd Cushenberry III was placed on injured reserve on Nov. 8, guard Graham Glasgow left Sunday’s loss at Tennessee with a shoulder injury and guard Billy Turner was placed on IR on Monday with a knee injury.

Glasgow was able to practice limitedly Wednesday, so his chances of playing Sunday are improving. He is listed as questionable, as is safety Justin Simmons, who has been in and out of the lineup this year.

Simmons missed the Broncos’ most recent game, a 17-10 loss to the Titans, with a knee injury but practiced Wednesday.