Wizards unlikely to have Kristaps Porzingis vs. Pistons 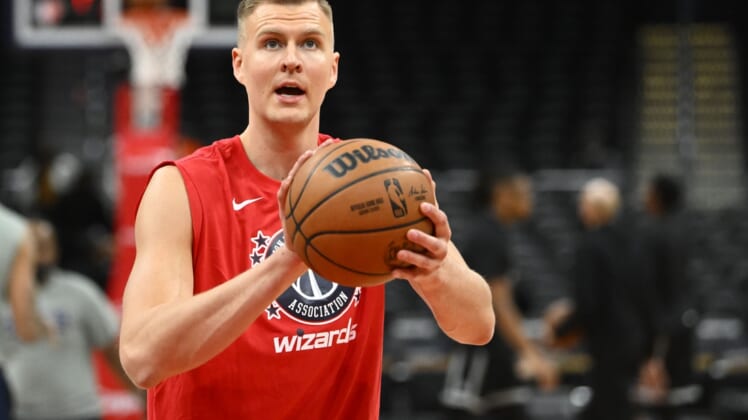 Washington fans hoping to see Kristaps Porzingis’ Wizards debut against the visiting Detroit Pistons on Monday might need to wait a little longer.

Porzingis was acquired from the Dallas Mavericks at Thursday’s trade deadline, but the 7-foot-3 center is dealing with a bone bruise in his right knee and sat out Saturday’s 123-110 loss to the Sacramento Kings.

With the Wizards far removed from playoff contention, the team is not rushing its prize acquisition back to action. He’s listed as day-to-day.

“My only focus is, get back on the court as soon as possible,” Porzingis said, “healthy 100 percent and finish the season strong, consistent and hopefully make some noise.

“Just a bone bruise. I kind of played through it a few games in Dallas, but then I realized something’s not right. Did MRI, bone bruise, nothing serious. You just have to sit out some time and let the bone heal. My feeling is that I’m pretty much there where I need to be to start playing.

“But I think with these kind of things, you have to be a little bit on the safe side to get enough time to heal and not really reaggravate it.”

While Porzingis is unlikely to be available Monday for Washington, center Marvin Bagley III could make his Pistons debut.

Bagley was acquired from Sacramento on Thursday in a four-team deal in which the Pistons traded Josh Jackson, Trey Lyles and two future second-round draft picks.

The 6-foot-11 Bagley should provide a much-needed spark for the rebuilding Pistons, who have lost seven straight and 11 of their last 12 games.

Detroit’s defensive woes continued Friday in a 141-119 loss to the Charlotte Hornets.

The Pistons struggled to slow down Charlotte, which shot 56 percent from the field and 43 percent (18 for 42) from 3-point range.

“If you give up 36 and 43 points (in the first two quarters), that’s not a lot of defense in that situation, and that’s what we’re going to get back to,” Pistons coach Dwane Casey said. “We’ve got to get back to playing some semblance of defense, and if you can’t guard your position, we’ve got to find somebody that can.”

One bright spot was the play of rookie guard Cade Cunningham, who returned from a five-game absence (hip pointer) and finished with 12 points and five rebounds in 22 minutes.

Saddiq Bey is averaging 21 points over his last two games for the Pistons, who have lost their last 12 road meetings against the Wizards.

Washington won the season’s first matchup against the Pistons in Detroit on Dec. 8. Kyle Kuzma hit a 3-pointer with 0.6 seconds left to give the Wizards a 119-116 overtime victory.

With star Bradley Beal (left wrist surgery) out for the season, Washington is leaning heavily on Kuzma. The fifth-year pro has responded by averaging 19.6 points, 7.9 rebounds and 4 assists in his last seven games.

Coach Wes Unseld Jr. is also asking more of point guard Raul Neto, who moved into the starting lineup after the Wizards traded Spencer Dinwiddie and Davis Bertans for Porzingis, and Aaron Holiday to Phoenix for cash considerations.

Washington center Daniel Gafford has missed the past three games while in the NBA’s health and safety protocol but could return on Monday.