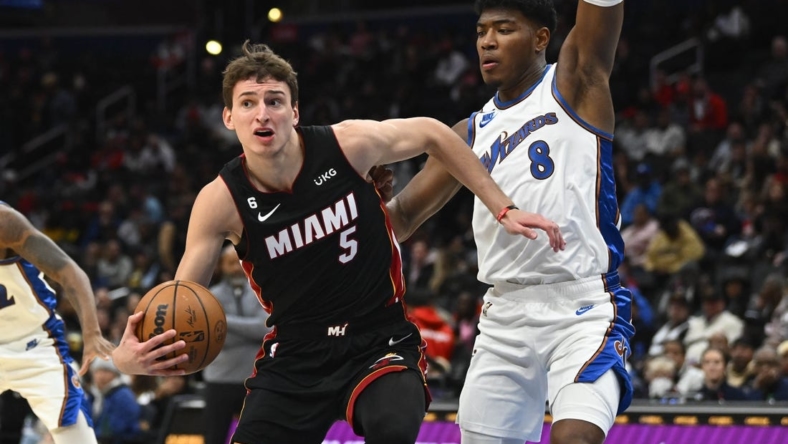 Bradley Beal recorded 27 points and eight assists to fuel the host Washington Wizards to a 107-106 victory over the short-handed Miami Heat on Friday.

Kyle Kuzma scored 21 points — including the game-winning free throw not even midway through the overtime period. That held up, however, as Max Strus was unable to make an open look from well beyond the arc as time expired.

Washington’s Kristaps Porzingis collected 20 points and 17 rebounds for his sixth double-double of the season.

Corey Kispert highlighted his 17-point performance by sinking five 3-pointers for the Wizards, who have won five of their last six games.

Strus had 22 points, Nikola Jovic added 18 and Orlando Robinson contributed 14 in his NBA debut for the Heat, who have lost two in a row overall and fell to 1-5 on the road this season.

The Heat committed just nine turnovers after posting 23 in a 112-104 loss to the Toronto Raptors on Wednesday.

Washington erased a five-point deficit in the final minute of the fourth quarter, as Beal made a layup with 54.8 seconds to play before Kuzma sank a corner 3-pointer with 15.3 seconds remaining.

Orlando Robinson converted a three-point play to give Miami an 85-72 lead with 4:31 remaining in the third quarter before Kispert countered with a traditional 3-pointer. That shot appeared to spark Washington, which trimmed its deficit to seven by the end of the third before Kispert sandwiched 3-pointers around Beal’s three-point play to give the Wizards a 90-88 lead.

The Wizards recognized the trio of Gilbert Arenas, Caron Butler and Antawn Jamison at halftime. The three players helped the team record three playoff appearances during their time together from 2005-10.