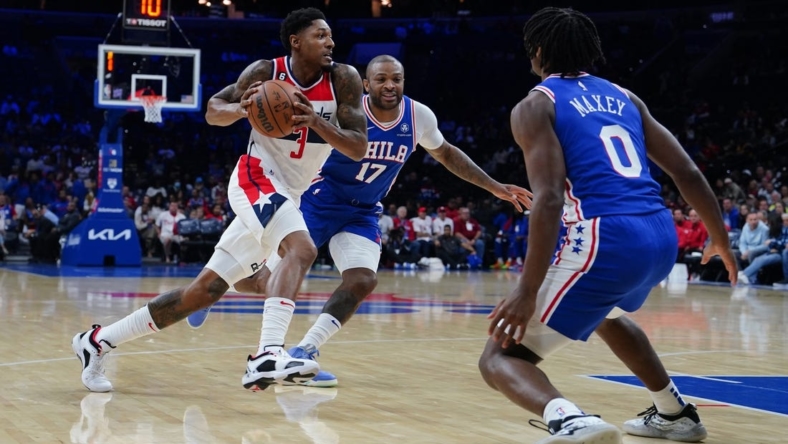 Though a tight game most of the way, Washington never relinquished its lead after pulling ahead late in the first quarter.

The Wizards’ advantage never expanded to more than 12 points. However, they kept the 76ers — playing without Joel Embiid due to a non-COVID illness — at bay thanks in part to a massive 68-38 scoring advantage in the paint.

Porzingis, in particular, flourished on the interior, hitting all five of his shot attempts in the lane. He shot 9-for-13 from the floor overall.

Beal also thrived on the inside with seven field goals made in the paint, all at the rim. He shot 11 of 17, while Kyle Kuzma — who chipped in 18 points and eight rebounds — went 8 of 12 from the floor.

Porzingis, Beal and Kuzma helped buoy Washington to 57.7 percent shooting as a team.

The 76ers relied heavily on the 3-pointer without their big man Embiid available and connected on 19 of 36 attempts. Tyrese Maxey shot 5-for-9 from beyond the arc, part of his game-high 32 points.

Tobias Harris shot 4-for-5 from deep en route to 16 points while James Harden went 3-of-8 shooting outside and finished with 24 points.

Washington’s 121 points marked a season-high as the Wizards pulled out of their three-game funk, which included a loss at home Monday to the 76ers.

Six Wizards in total scored in double-figures on Wednesday, including Rui Hachimura, who recorded a double-double of 10 points and 10 rebounds. Will Barton added 11 points and Daniel Gafford provided 10 points in just over 11 minutes of play.