PREVIEW: Washington Wizards look to build off big win as they face Blazers 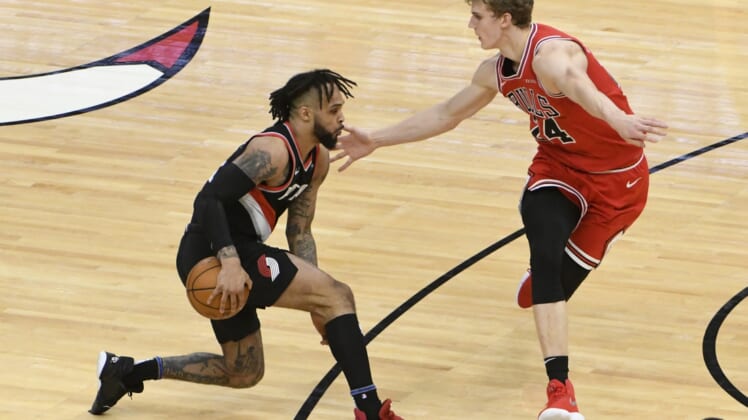 The Washington Wizards are fresh off their most electric performance of the season.

However, the Wizards still possess one of the worst records in the NBA as they look to build on some rare momentum when they host the Portland Trail Blazers on Tuesday night.

Washington recovered from an 18-point deficit and scored 48 fourth-quarter points while ambushing the visiting Brooklyn Nets 149-146 on Sunday.

The Wizards were staring at another setback when they trailed by five with under 10 seconds left. However, Bradley Beal nailed a 3-pointer with 8.1 seconds left and Russell Westbrook hit the go-ahead trey with 4.3 seconds to go as the beleaguered team notched an improbable victory.

“This was the craziest game — one of the craziest, if not the craziest — that I’ve ever been around,” Wizards coach Scott Brooks said after his team improved to 4-12. “We fought, we battled, we clawed and we gave ourselves a chance. Hopefully this is the start of something that we’re going to be pretty proud of.”

The contest also shows the magic that the backcourt combo of Beal and Westbrook is capable of producing.

Westbrook, who recently recovered from a quadriceps injury, scored a season-high 41 points and also had 10 rebounds and eight assists. He shot 16 of 28, including 4 of 7 from 3-point range.

Westbrook, who was acquired from the Houston Rockets prior to the season, said he feels refreshed after his injury absence.

“I was able to take those two weeks off — obviously our team wasn’t back yet either (from a COVID-19 pause) so that definitely allowed me a little more time to be able to get healthy and be able to move and attack and have my legs underneath me and be able to play,” Westbrook said. “Now we just have to make sure we use this momentum going into the next game.”

Beal scored 37 points against the Nets — including 22 in the fourth quarter — and has scored at least 26 points in all 15 games in which he has played. He leads the NBA with a 34.9 scoring average.

Portland features the NBA’s third-leading scorer in Damian Lillard, whose average dropped to 28.9 when he scored 17 points while playing just 27 minutes Monday in the Trail Blazers’ 134-106 loss to the host Milwaukee Bucks. Lillard averaged 34 points over the previous eight contests.

Veteran Carmelo Anthony had just six points in his third straight poor outing. He averaged 5.3 points while making just 6 of 30 shots during that stretch.

Trail Blazers coach Terry Stotts took exception in the postgame press conference when a reporter referred to Anthony’s troubles as a “massive slump.”

“I wouldn’t call it a massive shooting slump,” Stotts said. “He’s had a couple poor shooting games. Melo has earned the right to play through a shooting slump.”

While the 36-year-old Anthony is struggling, 20-year-old Nassir Little had the best game of his two-year career against Milwaukee.

Little received 30 minutes of playing time in the blowout and scored a career-high 30 points. He knocked down 11 of 18 shots, including 5 of 7 from 3-point range.

“He was a bright spot for sure,” Stotts said of Little. “It was good to see him go out there and put the ball in the basket and get some extended run.”

Portland experienced repeated issues on defense as Milwaukee shot 55.2 percent from the field and canned 21 of 42 3-point attempts.

It marked the fourth time in the past six games that Portland allowed more than 120 points. Stotts said the loss of big man Jusuf Nurkic (fractured wrist) has been a major factor.

The Trail Blazers have won their past three meetings with the Wizards.