Wizards, Knicks playing their own version of March Madness 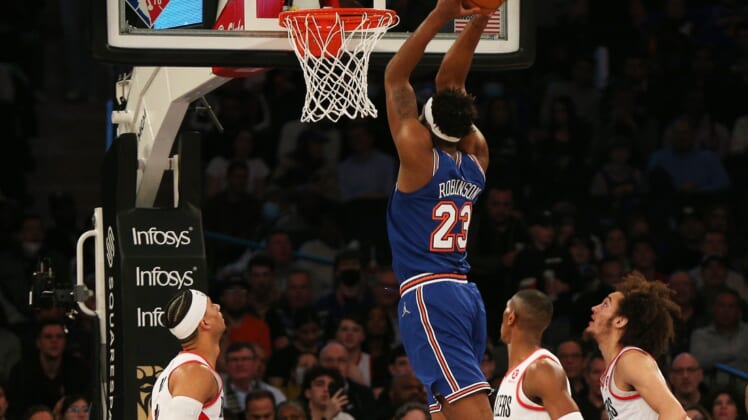 But their chances of getting into the potential one-and-done scenario of the Eastern Conference play-in tournament may rest on who wins when the Wizards visit the Knicks in the penultimate meeting of the season between the teams.

The Wizards won the first game between them this season, 124-117 on Dec. 23 at Madison Square Garden.

Both clubs were off Thursday after playing at home Wednesday night, when the Knicks led almost wire-to-wire in a 128-98 rout of the Portland Trail Blazers and the Wizards suffered their fifth straight loss by falling to the Denver Nuggets, 127-109.

While both teams remain far behind the 10th-place Atlanta Hawks in the race for the final Eastern Conference play-in spot, the results Wednesday set up a battle for 11th place. At 29-39 the Wizards are 4 1/2 games behind the Hawks and a half-game ahead of the 12th-place Knicks, and both still have a shot at the play-in tournament.

The Wizards know their skid will continue — and their play-in hopes disappear — if they aren’t able to fix a porous defense. Washington has allowed at least 115 points in each of its past five losses and has surrendered 113 points in nine of its past 10 games, a stretch in which it’s gone 2-8.

The Knicks, who ended a seven-season playoff drought last year thanks in large part to allowing a league-low 104.7 points per game, have climbed back onto the periphery of the play-in race thanks to a renewed defensive commitment.

In addition, each of the Knicks’ past three losses — to a pair of Western Conference contenders, the Phoenix Suns and the Memphis Grizzlies, as well as the Brooklyn Nets — was by four points or fewer.

“I’ve said this from the All-Star Break on: The team is playing really good basketball,” head coach Tom Thibodeau said after the Knicks trailed just once in the win over the Trail Blazers. “But also the spirit of the team, the way they’re practicing, I can see the improvement every day.

“And look, we’re gonna keep scratching, Who knows where this ends up? So just get ready for Washington. That’s all we’re worried about.”