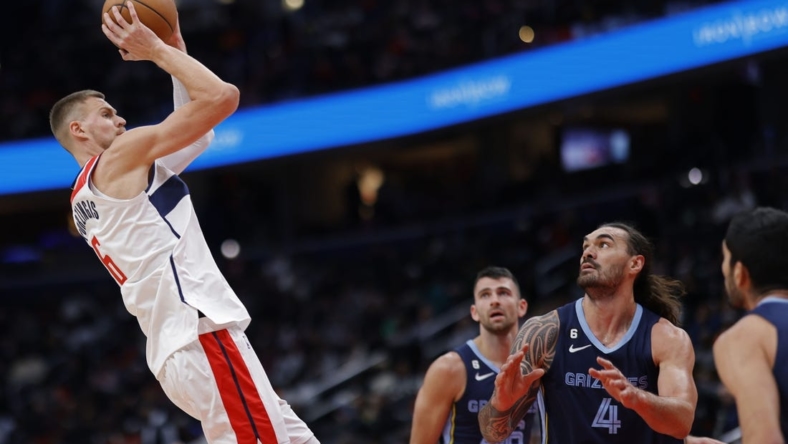 Kristaps Porzingis scored 25 points, including a season-high six 3-pointers, and the Washington Wizards extended their winning streak to four games with a 102-92 victory over the visiting Memphis Grizzlies on Sunday.

Deni Avdija matched his career high with 21 points for Washington, while Corey Kispert added 12, Monte Morris had 10 points and six assists and Jordan Goodwin contributed 10 points and eight rebounds off the bench.

Avdija made four of the Wizards’ season-high 19 3-pointers. Washington entered the contest averaging 9.7 made 3-pointers per game.

Kyle Kuzma chipped in nine points and 11 rebounds for the Wizards, who avenged a 103-97 loss to Memphis on Nov. 6.

Washington was in control for much of the second half and held an eight-point advantage after three quarters. The Wizards stretched their lead to 93-80 on Porzingis’ step-back 3 with 7:29 remaining.

Memphis cut the deficit to 100-92 with 1:27 left before Porzingis made two foul shots to secure the win.

Both teams struggled offensively to open the game. The Wizards led 23-19 at the end of the first quarter after both teams shot under 40 percent under the field.

Memphis moved ahead by nine with 4:26 left in the second quarter before Porzingis hit consecutive 3-pointers during an 11-0 run to give Washington a 49-47 lead. The Wizards were up 55-51 at the break.

Porzingis made five 3-pointers and scored 19 points in the first half to lead the Wizards, who were 11 of 20 (55 percent) from beyond the arc for the half.

Washington played its fourth straight game without leading scorer Bradley Beal, who was held out as he reconditions following health and safety protocol.