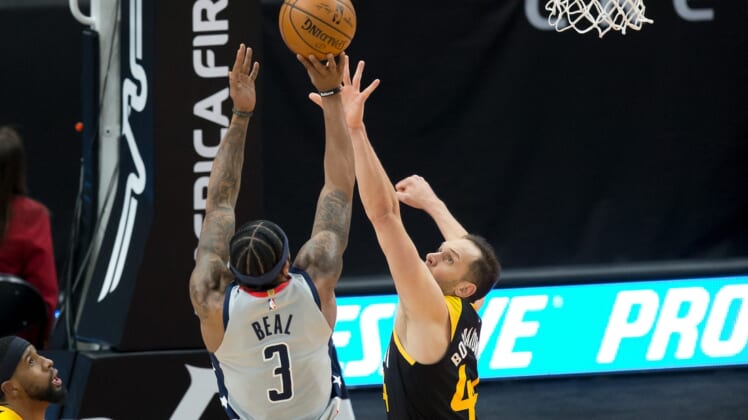 This result snapped the Jazz’s franchise-record 24-game home-winning streak and was the first loss for Utah on its court in 2021. The last time an opponent won at Vivint Arena was a Phoenix victory on New Year’s Eve 2020.

Westbrook scored 25 points, dished out 14 assists and grabbed 14 rebounds to help the Wizards beat the Jazz for the second time in a month. Utah had won 11 of 13 games overall since falling at Washington in March.

The loss spoiled big scoring nights for the Jazz’s Donovan Mitchell, who scored 42 for his fourth straight game with 35 or more, and Bojan Bogdanovic (33 points).

Mitchell scored 17 in the first quarter as the Jazz jumped out to a 42-33 lead and looked like it was on its way to another home win. But, playing without Mike Conley and Jordan Clarkson, the Jazz struggled defensively all night to contain Beal and Westbrook.

Utah slowly chipped away at Washington’s lead throughout the quarter, eventually pulling within two after Mitchell burst down the court for a layup with 12.3 seconds left, capping a 29-12 push. Beal left the door open for the Jazz by missing two free throws prior to that.

But Beal and former Jazz guard Raul Neto each drained two free throws in the final seconds to help the Wizards improve to 3-2 on their six-game road trip that ends Wednesday in Sacramento.

Without two key players, the Jazz were limited in their depth and the Wizards took advantage of that, outscoring the hosts’ bench 59-14. Washington also shot a blistering 52.2 percent overall against a usually stingy Jazz defense.

Rudy Gobert added a double-double of 12 points and 12 rebounds, and Joe Ingles was the only other Utah player with double-figure scoring with 18 points. The Jazz host Oklahoma City on Tuesday.