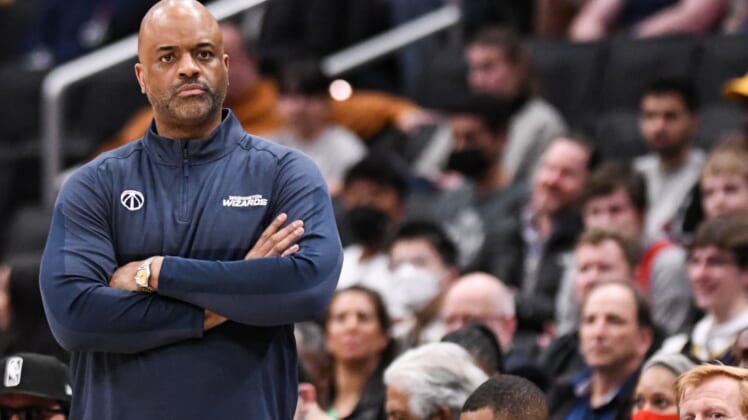 The Washington Wizards aren’t officially eliminated from playoff contention, but they are running out of time.

They lost for the eighth time in nine games on Thursday, falling 114-102 at Milwaukee even though the Bucks were playing without stars Giannis Antetokounmpo and Khris Middleton.

The Wizards, who clinched a losing record for the fourth straight season, will finish off a three-game road trip when they visit the Detroit Pistons on Friday.

Washington (30-42) is 5 1/2 games behind the Atlanta Hawks, who hold the final Eastern Conference play-in spot, with 10 games remaining.

The Wizards fell behind the Bucks 32-13 after the first quarter on Thursday, and Washington never recovered.

“We did not have the right approach,” Wizards coach Wes Unseld Jr. said. “I didn’t think we were ready to play, understanding that they were going to come out with a sense of urgency. We didn’t have that same sense.”

The Wizards outscored the Bucks by 14 points in the final quarter, but it served only to make the final score more respectable. Washington never got closer than seven points after the game’s opening minutes.

“Second half was night and day, particularly the fourth quarter, but we have to avoid those sluggish starts,” Unseld said. “Whether we’re making shots or not, we’ve got to be able to get some defense into the game early.”

The Wizards will attempt to complete a four-game sweep of the season series against Detroit, but they may not have forward Kyle Kuzma, who has missed the past three games due to right knee tendinitis. He is averaging 23.3 points, 7.7 rebounds and four assists against the Pistons this season.

Detroit (20-53) is coming off just its second win in the past eight games, a 122-101 rout of the visiting Atlanta Hawks on Wednesday.

However, more telling was Cunningham’s impact on the victory, as the Pistons were plus-43 when he was on the court. It was the best single-game plus-minus total by a Detroit player since April 17, 2012.

“I don’t know that I’ve had anybody here that had a 43,” Pistons coach Dwane Casey said. “That’s impressive on his part because that means he’s defending and contributing on the offensive end.”

Cunningham, the overall top pick in last year’s draft, is averaging 17.1 points, 5.8 rebounds and 5.5 assists. He started off a 23-0, third-quarter outburst against the Hawks with a pair of layups.

Detroit had eight players in double figures, led by Jerami Grant with 21 points. Saddiq Bey scored just 10 points, but he broke a franchise record. His three 3-pointers gave him 192 for the season, topping the mark of 191 set by Allan Houston in 1995-96.

Kelly Olynyk led the Detroit reserves with 16 points, his highest output in 11 games this month. He hit 6 of 9 field-goal attempts.

“He’s not going to forget how to shoot,” Casey said. “He may miss a few, but sooner or later the shooting’s going to come back. … Like I said earlier in the year about Cade, I’m not worried about Kelly. He’s going to do what he does on the offensive end. But it’s good to see him get back in a rhythm and get his feel back again as we go into next year.”