Without their captain, Avalanche aim to douse Flames 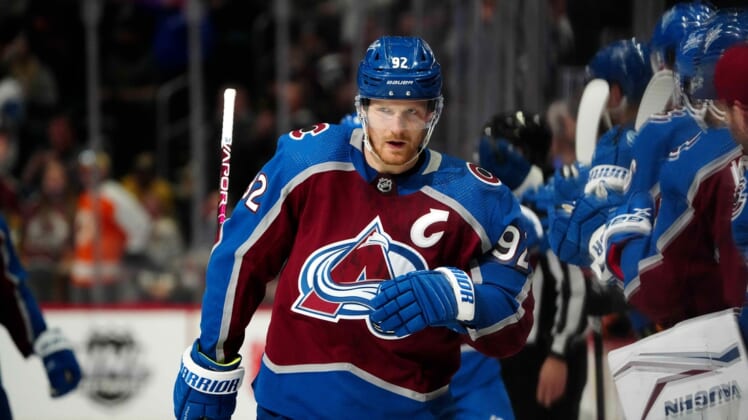 The Colorado Avalanche have dealt with injuries all season and yet are tied for the most points in the NHL.

Landeskog has a team-best 30 goals despite being hindered by the knee.

“Something’s going on with his knee and it’s been bothering him for a while, and it’s getting worse. He’s got to get it fixed,” said coach Jared Bednar, who added the hope is Landeskog will return for the start of the playoffs.

Avalanche defenseman Samuel Girard is expected to miss four weeks with a lower-body injury. Girard didn’t play in the 2-0 loss at Carolina on Thursday night.

Colorado is tied with the Hurricanes with 87 points after losing the final two contests of a three-game road trip. The last time the Avalanche dropped consecutive contests in regulation was a three-game skid on Oct. 16-21.

The loss at Carolina was the first time Colorado has been shut out this season.

Calgary is coming off a 3-0 win against Detroit on Saturday night and is facing a disadvantage with the schedule – and time. Daylight Saving Time kicks in Sunday, meaning the Flames are losing an hour while traveling on the road.

“Should be quite a bit fresher than us, shouldn’t they? They’ve been home for three days,” coach Darryl Sutter said after Saturday night’s game. “We have to fly tonight.”

It might not matter considering how well Calgary has played of late. The Flames are 18-3-1 in their last 22 games, including a 4-3 overtime win over the Avalanche on March 5 in Denver.

They won Saturday without defenseman Oliver Kylington, who was a late scratch with a lower-body injury. The Flames said he is day-to-day.

Despite his absence, the Flames recorded their 11th shutout of the season. Jacob Markstrom notched his NHL-best ninth of the campaign after making just 19 saves.

“It’s his job, playing on a good team,” Sutter said after the win. “Simple. He had to make some saves in the third, so he stayed focused. It’s his job.”

He’s done his job quite well this season. He has more shutouts in 2021-22 than his previous 11 NHL campaigns.

“It’s definitely a team stat,” Markstrom said. “I just try to tell the guys to keep going and keep playing this way. It’s fun to be a goalie for this team.”

Calgary likely will turn to Dan Vladar, who is having a solid season backing up Markstrom. Vladar is 8-4-1 in 14 games this season and has a 2.96 goals-against average. His last start was the Flames’ only regulation loss since Feb. 24, a 5-4 setback against on Tuesday.

“I play with obviously two really good players (Johnny Gaudreau and Matthew Tkachuk),” Lindholm said. “A lot of goals have been easy goals, but it’s always nice to get to 30. I’ve been close a couple times but haven’t been able to get there. It’s obviously nice to finally break it.”