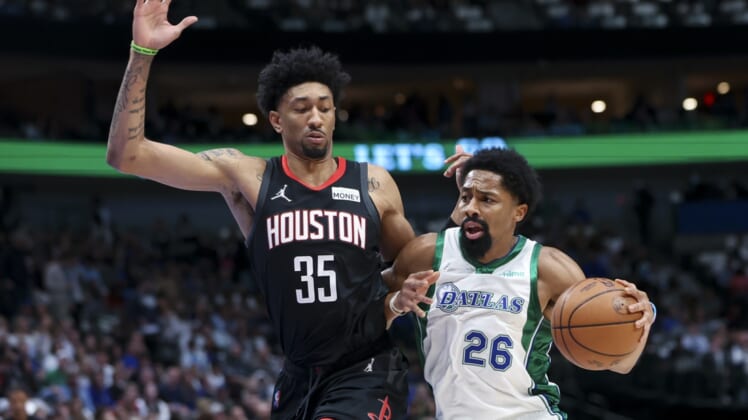 Jalen Brunson scored 16 of his game-high 28 points in the third quarter and the Dallas Mavericks completed a season sweep of the visiting Houston Rockets with a 110-91 victory on Wednesday.

Brunson shot 5-of-6 from the floor and 6-of-7 from the free-throw line in the third quarter. His play was critical in helping the Mavericks seize control following a back-and-forth first half.

Spencer Dinwiddie, starting in the place of All-Star Luka Doncic (ankle), added 26 points — 19 in the first half. Dinwiddie entered averaging 21.2 points in six starts with the Mavericks, who improved to 9-8 without Doncic.

Dallas (45-28) has won 16 of 21 games and moved into a tie with the Utah Jazz, who lost at Boston on Wednesday, for fourth place in the Western Conference.

Rookie center Alperen Sengun recorded a double-double of 14 points and 11 rebounds off the Houston bench while Christian Wood followed a career-best 39-point performance Monday against Washington with 12 points and 10 boards. The Rockets missed 24 of 28 3-pointers.

Dinwiddie got the Mavericks off to a strong start with 11 first-quarter points on 3-of-3 shooting and was the fulcrum of an 11-2 run to the lead. But the Rockets rallied in the second quarter behind their bench, with Dennis Schroder and Sengun scoring seven points each in the period.

Houston received 22 points from its reserves in the second and shot 12 of 17 from inside the arc in the period, one that featured seven lead changes and four ties. The Rockets fashioned a 53-52 lead at the intermission even though Brunson and Dinwiddie combined for 31 points.

Brunson completed a three-point play at the 4:23 mark of the third that pushed Dallas to its largest lead of the game at 72-65. The Mavericks extended to a double-digit advantage when Finney-Smith nailed a 3-pointer just over one minute later and, when the Mavericks opened the fourth with a 13-3 run capped by a Frank Ntilikina 3-pointer, the lead swelled to 95-75 with 8:09 to play.