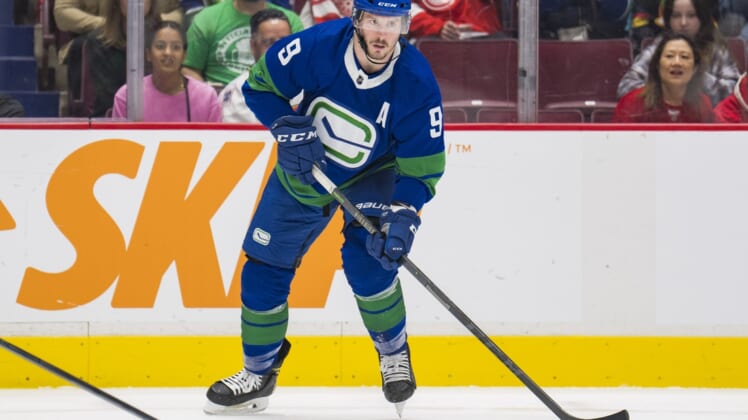 The Vancouver Canucks are just outside the playoff bubble with 20 games remaining. They’re also rumored to be a hot seller heading into Monday’s NHL trade deadline.

Whichever direction the team and certain players end up going, Vancouver coach Bruce Boudreau said the Canucks haven’t displayed much outward emotion as they prepare to host the Calgary Flames on Saturday night.

“They’re either keeping it all bottled up, or it’s not bothering them,” Boudreau said.

Vancouver hasn’t taken advantage of a seven-game homestand, posting 2-2-1 record, including a 1-0 loss to the Detroit Red Wings on Thursday.

Vancouver sent 43 shots at Alex Nedeljkovic, but he stopped them all.

“It’s one of those days when you just have to tip your hat to the other goalie,” Vancouver center Elias Pettersson said. “We’ve got to find a way to put the puck in the net.”

The Canucks are just three points back of the second wild-card position in the Western Conference but will face a tough stretch with five sets of back-to-back games in the final 20, beginning with Saturday against the Flames and Sunday against the Buffalo Sabres.

The Flames also are coming off a 1-0 loss, but theirs came Friday against the Sabres in overtime.

Calgary had won three of four before that game but now has been blanked in two of the past three games after not getting shut out all season.

The Flames remain atop the Pacific Division with a six-point lead over the second-place Los Angeles Kings.

The Flames are making a quick one-game trip to Vancouver before returning home for six straight games, and they likely haven’t forgotten that it was the Canucks who ended their 10-game winning streak with a 7-1 rout on Feb. 24.

Dan Vladar didn’t start that game in goal, but he stopped 13 of 17 shots in relief of Jacob Markstrom.

Vladar is expected to start against the Canucks on Saturday after Markstrom made 33 saves in the overtime loss to the Sabres on Friday.

The games against the Sabres and Canucks are the first of five back back-to-back sets on Calgary’s remaining schedule.

Calle Jarnkrok made his Calgary debut on Friday after he was acquired in a trade with the Seattle Kraken on Wednesday in exchange for future draft choices.

Thatcher Demko is expected to start in goal for the Canucks. He has stopped 95 of 101 shots for a .941 save percentage over his past three starts.

Vancouver forward J.T. Miller will try to start another point streak after his 13-gamer ended against the Red Wings. He had 27 points (eight goals, 19 assists) during the streak, which began Feb. 12.

Pettersson returned against Detroit after missing two games with an upper-body injury, but teammate Nils Hoglander is expected to remain sidelined with a lower-body injury suffered in practice on Wednesday.